The Sony Z5 Premium features the first ever 4K display on a smartphone. 4K on a smartphone? Dat be crazy! That's why you're here of course. You want to know if an insane 806ppi resolution really makes a difference.

It does, of course, despite whatever Steve Jobs may have said on the subject. If you have good eyesight, you can just about pick out detail that fine. But that is irrelevant. You're asking the wrong question. The real question is, does UHD content exist for smartphones yet? And the answer is largely no. There's a smattering of YouTube videos, a smidgeon of Netflix shows, and those 4K videos that you shot on your smartphone last summer. But all of that content is compromised by compression artefacts, bandwidth issues, and the vodka Red Bulls that you consumed just before shooting the video. So can you really tell the difference? Probably not.

But phones are different. Phones are personal. We want our phone to be the best. And there is a certain logic of inevitability that will surely drive all smartphone makers towards 4K during 2016/2017. So why not be the first? Just do it, and don't look back.

So, 4K, whatever. We're so over that already. Let us tell you the real story behind the Sony Z5 Premium.

The first time we picked up Sony's original Z series phone back in 2013 we fell in love with its super-premium, super-thin, iconically rectangular and uncompromising design. We loved it. That love affair continued until the disaster of the Z3+. The Sony Z5 restored our faith to some extent, except that the matte finish of the Z5 left us feeling a little jaded. We missed the glamour of sparkly glass. And we needed that in our lives, especially at this time of year when the days are short and the nights dark and cold.

Now, that glamour has returned with the Z5 Premium. 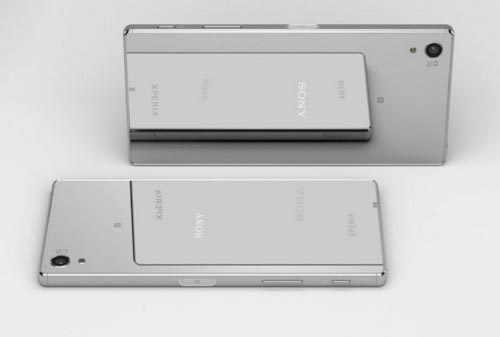 The Z5 Premium is a little larger than the Z5, thanks to the slightly larger 5.5 inch screen. It's a tiny bit thicker, and a fair bit heavier, and that's because of metal. Unlike the restrained matte glass finish of the Xperia Z5, the Z5 Premium has gone for broke with a mirror-effect chrome finish. It's brought a little light back into our hearts, and quite a few fingerprint smudges too. It's as premium as it gets, and we adore it.

The button layout on the right hand edge of the phone follows the pattern on the regular Z5, with the power button doubling as a fingerprint sensor that can be used to unlock the phone. The positioning of the volume rocker below the power button isn't to our liking so much, but we thank Sony for keeping the dedicated camera button.

Despite its large size and weight, this phone feels really good to hold. The weight makes it feel solid, and the rectangular flat styling gives it a purposeful, serious demeanour. The phone is waterproof and dust tight, certified to the IP68 standard. It's available in a choice of Chrome, Black, or Gold. Did we mention that we love it?

The rest of this review risks becoming boring, because the internals of the phone are the same as the regular version of the Xperia Z5. We'll just run through it again, in case you haven't read that review.

Any phone with "Premium" in its name needs a superfast processor to power it, and so the phone comes with Qualcomm's mighty Snapdragon 810. This 8-core monster, coupled with a massive 3GB of RAM is capable of munching its way through any flimsy app that comes in its path. That means that the latest 3D games will all run at full throttle, and you can multitask like you just don't care.

There's an issue with heat dissipation when the processor is running at full speed, but it's much less than in the ill-fated Z3+ and not anything that will actually stop the phone from shutting down.

The phone has a generous 32GB of flash memory, and accepts microSD cards right up to 200GB. That's a lot of storage, and a definite advantage over fixed-storage rivals like the Galaxy S6 and iPhone 6s.

With a 4K screen, you'll definitely want to be shooting 4K videos and capturing hi-res images on your camera. The Z5 Premium is happy to oblige.

The main rear-facing camera has a new 23 megapixel Exmor RS sensor, and is able to take pin-sharp images that can be zoomed several times before any softening or grain is visible. Colour accuracy is good, and in HDR mode, very high quality images can be captured, even in poor lighting. The camera uses a new hybrid autofocus system, making it incredibly fast to focus on subjects.

And of course the camera can also record UHD 4K video, with video stabilisation. One advantage of 4K video is that you can pull out any frame as an 8 megapixel still shot. It does require a lot of storage space though - good job that the Z5 Premium has plenty!

The front camera has 5 megapixels and uses an Exmor R sensor. It can capture 1080p HD video.

The Z5 Premium has all its connectivity bases covered, with the exception of USB Class-C, which is starting to appear on phones like the Nexus 6P.

As well as 4G, Wi-Fi, GPS and the usual array of connections (see specs below for full details), the phone talks nicely to a compatible TV, letting you show your photos and movies on the big screen.

Tricky. The Z5 Premium has a much larger battery than the normal Z5. In fact it's one of the biggest on any smartphone. But that 4K screen is a greedy gobbler of power, and does its very best to drain the battery. What happens when an unstoppable force meets an immovable object? Seemingly, the two forces balance out, and the Z5 Premium delivers a full day of battery power. The phone's Stamina mode conserves power when the phone is in standby, so light users can expect to get up to two days between charges.

But it's all about the screen. Use the phone continuously and the battery will drain quickly.

Fortunately the quick charger will pull back a few hours of power in just 10 minutes of charging.

Conclusion - we love it!

The Z5 Premium surprised us. On paper, it's a fail. It costs more than the - already expensive - Xperia Z5, for the almost-certainly pointless addition of a 4K screen. Surely a fail?

And yet. In the flesh, it's so much more than an expensive phone with a headline-grabbing gimmick. It's the superphone of 2015 - the phone that can match, or beat, every other phone in every single category. Screen - obviously. Performance - as fast as anything. Camera - easily up there with the best. Memory - more than most.

But for us, it's the look and feel that won us over. Compared with this, the Galaxy S6 is flimsy and lightweight and the iPhone 6s looks more than ever like a kid's toy phone. Admittedly, we also love the Galaxy S6 Edge, and we still hold a torch for the HTC One M9. But the Xperia Z5 Premium is as good as any phone we've seen in 2015, and is a match for all.

Reviewed by Phil from UK on 25th Jul 2017
Bought this second hand, and so far not disappointed. The camera shutter is split second fast, the buttons are in the right place, with dedicated camera button always a bonus. The 4K video facility is amazing, though the camera dos get very warm if you use this over 3 minutes. But the images are awesome. The phone doesn't feel overly heavy, just right in fact. Battery life isn't anything to write home about, but for my needs it works.
Rating:

Reviewed by Brett from UK on 17th Aug 2016
The phone came with the stamina power management which was a very good feature giving me about 2 days of moderate use, however, with the latest android update this has gone in favour of android's own power save app which is pretty appalling, from 2 days to less than one is a huge step backwards.

My other black mark against it is all the Sony bloatware that cannot be uninstalled, yes I can block or force stop the apps but they restart when the phone starts. The worst of the bunch is the file managment app File Commander, not a particularly good app but to make things worse Sony have been incredably cheap and put on a free 'trial' version on instead of the full program, I now get ads every time I use it and prompts me to upgrade on a weekly basis, eating into my data allowance.

I doubt if I'll be buying another Sony phone if this is thier business model.
Rating:

Reviewed by Jamie from UK on 8th Dec 2015
I have bought this phone to replace my frustratingly ageing and slow Samsung Galaxy S5. I think I will miss the removable battery. However after the first 3 days of use of my new Sony Z5 Premium, I am leaving my house at 7.30am with a full battery and by 9.00pm I still have 15% of battery left which isn't bad at all as I am a heavy user of the phone. I am surfing the net pretty much all morning on the phone, checking emails, replying to texts and watching the odd video on Facebook. I will make a 30 minute phone call at lunch and then spend time checking out Facebook and replying to texts all afternoon and evening. It probably won't last all night if I go to bed at 11.00pm but I am still impressed with the battery life. The screen is very impressive, however its not as bright as the Samsung I had before. Build quality though is on another level. It feels very solid in the hand, it feels a lot more heavier than the S5. The phone is a little on the large size but I will get used to it. It is fast and responsive, no lag at all and I really like the feature where with one click you can move everything from the phone and transfer it to your memory card. A frustrating feature of the Samsung S5 was when apps updated, they reloaded on your phone memory and then your phone became unresponsive and you had to move each app one by one back to your memory card. IF this happens on this phone, the ability to move everything by one press to your memory card will be a god send. To sum it up, its a top end phone and I love it, however I do wish the screen was a little brighter. In the summer it could be a problem. The camera is outstanding, speakers are loud and videos look great on the screen. I was going to go for a iPhone 6s Plus however I'm glad I got the Z5 Premium. You get so much more for your money.
Rating:

Reviewed by Mark from England on 18th Nov 2015
I've only had this phone for 3 days, and it really is the best I have ever used. The screen is insanely clear, audio is cinematic, camera is fast and crystal clear, everything runs smooth and fast. There is nothing I can fault with it!
Rating: