The Sony M5 is a smart-looking phone that's very much in the tradition of Sony's premium Xperia Z series. At first glance, it could almost be the Xperia Z5, being very nearly the same size and shape as Sony's flagship smartphone, and almost as thin, measuring a wafer-slim 7.6mm. The 5 inch screen is almost as big too.

There are a few differences in appearance. The glass back of the phone is glossier - which we like - but the edges are plastic, although the corners are made of stainless steel for added durability.

In fact, durability seems to be a clear design goal of the M5. It's waterproof and dust proof - certified to the IP65/68 standards, which makes it waterproof to a depth of 1.5 metres for up to 30 minutes in fresh water. That doesn't mean you should take it in the sea, however!

At 143g, it's lighter than the Z5 too. Overall, the M5 looks and feels like a very high quality phone. It's available in Black, White or Gold. 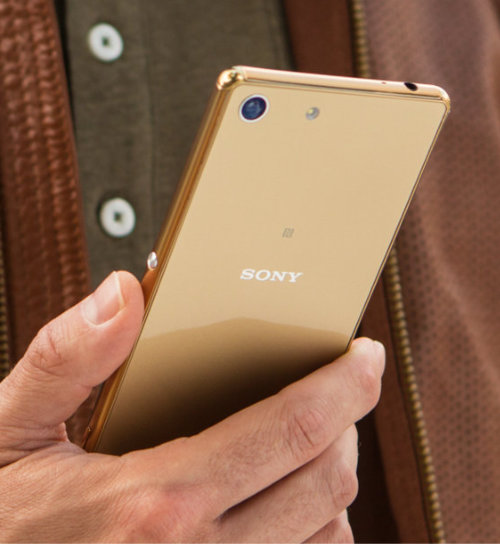 The screen is superb. 5 inches seems to have emerged as the perfect size for a screen in 2015/2016, with plenty of space for browsing the web, playing games and watching videos, plus enough room for all kinds of button tapping. Sony has pushed the screen resolution right up to full HD - 1920 x 1080 pixels - so there are as many pixels on this phone as there are on most TVs. The 441ppi pixel density gives outstanding detail in photos and videos. It's a bright screen too, using IPS technology to give pleasing colours and wide viewing angles. It's not quite in the same league as Samsung's AMOLED displays, but it's following close behind, and arguably produces more natural colours than the super-saturated AMOLED look. This is very much a high-end screen.

The screen is recessed slightly below the surrounding bezel for added protection.

Sony usually offers us a treat when it comes to photography, and the M5 is no exception. Both front and rear cameras use Sony's excellent Exmor RS sensors, with HDR for low-light performance, and there are a couple of surprises in store. 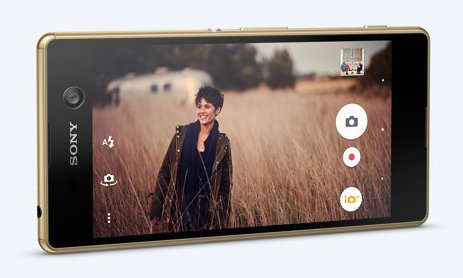 Firstly, the main rear-facing camera has a massive 21.5 megapixel resolution. You may not need to use this for most photos, but if you want to capture the finest details, then you can. The ultra-high resolution also comes in useful when you want to zoom. The camera has a 5x Clear Image zoom, enabling it to zoom right in and still preserve plenty of detail.

Focusing is very fast, thanks to the use of hybrid autofocus technology, and there are plenty of options available to enhance your photos if you want to make use of them.

The main camera is also superb at video, recording at 4K resolution, and with video stabilization to avoid camera shake.

Sony has made an unusual choice of processor for the M5. Rather than the usual Qualcomm Snapdragon option, it has chosen the MediaTek Helio X10. This may be because of the overheating problems caused by the Snapdragon 810 in phones like Sony's Xperia Z3+. Like the Snapdragon 810, the Helio X10 is an 8-core processor, but it uses very energy efficient Cortex-A53 cores. These run at up to 2.0GHz, making the Helio X10 just as fast - on paper - as the Snapdragon 810 used on many of today's flagship phones. In practice, the M5 isn't as fast as the Z5, but it's still one of the fastest mid-high-end phones you can buy.

The M5 comes with a massive 3GB of RAM, which certainly helps with performance - especially when multitasking. It also has a good amount of flash memory, with 16GB of internal memory, of which around 10GB is available to the user. This is a big step up from the M4 Aqua, which was cramped by its miserly memory allowance. In addition to the onboard memory, you can add a microSD card, and the M5 is happy to accept cards right up to 200GB.

Finally, we'll note here that the phone runs Android 5 (Lollipop) without too much bloatware from Sony. 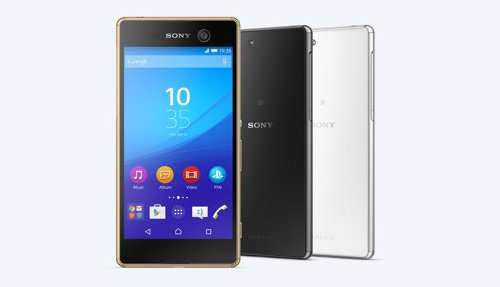 This is a 4G phone, with support for GPS and Glonass positioning, as well as Wi-Fi, Bluetooth, USB, a 3.5mm headphone jack, NFC, DLNA plus ANT+.

Sony is boasting about the "two-day" battery life of the M5, but really there's nothing exceptional about the battery life of this phone. The 2,600mAh battery is typical of a phone with this kind of spec, and it will last as long as most other smartphones. Sony's STAMINA mode can help to stretch battery life further, if you don't mind turning off certain types of notifications when the phone is locked.

We have no problems justifying a 5-star rating for the Xperia M5. It has the star looks of a flagship handset, being lightweight, ultra-thin and waterproof into the bargain. The screen and twin cameras are impressive, and the speed and memory are just right for a high-end phone at this price. If you are drawn to the design of Sony's flagship Z5, but can't afford the high price, then the Xperia M5 will give you a very similar phone with impressive performance, at a significantly lower price. See the full specs below.

The Samsung Galaxy S5 Neo and Huawei P8 are also worth considering, and are available for about the same price.

Reviewed by Pete from UK on 8th Mar 2018
The phone is great with a very good camera.
Unfortunately its battery life is abysmal.
If you use it at all or even if you don't use it, it's out of battery life by teatime.
Bought one, sent it back because I thought it was faulty, but the next one was the same.
Not a useable phone.
Rating:

Reviewed by Brad from Wales on 22nd Jan 2018
An exceptional phone with good looks and a decent battery life .Specs are of a good quality as well!
Rating:

I own one of this monsters and it's probably the most regretful thing I have done in my life...
-Battery life it's random at best, and don't dare asking about the overheating issue..
-rear camera... really? show me one decent picture you've taken with it... ON focus I meant..
-Slow system.. buggy... crashy... and never mind update resistant...

I've have been hating this thing since day one and there's not one person in the sony corporation that has a hair of distress over this horrible thing...

HATE IT!!! never ever again will get any sony device of any kind again...
Rating:

Reply by Leo Rusth from Denmark on 20th Jul 2018
Same here! Have never hated a phone or a Sony product as much as this! Just got a message, that 57 apps have been updated. I have installed max. 12 apps. The rest are junk, installed by Sony, which can not be deleated og deactivated. So they constantly update draw power and memory, though I would like to through them out. Not possibile!! So again: Never, ever again, will I purchase a cell phone from Sony!

Reviewed by Javier from UK on 8th Mar 2017
HORRIBLE PHONE, HORRIBLE CUSTOMER SERVICE.
It's sluggish slow, buggy and crashy AND the battery it's useless (and potentially dangerous)
Whats the point of having a 21MB camera if you can't take a picture?
AND, please... try and contact customer service if you need a reason to increase your frustration and disappointment... rude, unhelpful and arrogant... apparently that's essential to become a Sony Customer Service representative..
Rating:

Reviewed by Maxine from Uk on 18th Feb 2017
Rubbish phone dont bother!!! Honestly. I was duped into a 24 month contract not even a year has passed and carphone warehouse, who convinced me to take it, now want £288 to get out of contract... After them took my z2 off me as part of my "New DEAL"..... Gutted.
Rating:

Reviewed by garry anderson from england on 27th Dec 2016
Excellent phone, fantastic screen for a mid range phone (1080). Processor more than quick enough for everyday use, but demanding games show it is not a snapdragon chip. Only downside is, it does heat up but no problems apart from that after nearly a years ownership. Build quality still the best & it's waterproof! What more could you want from a phone half the price of a flagship ?
Rating:

Reviewed by Brad from Wales on 16th Nov 2016
Had this phone for six months now and its such a reliable and good looking phone.
Rating:

Reviewed by Kim from Australia on 30th Mar 2016
All good except that it randomly turns off and have to jump start with charger often. Hardly mobile. It is a common problem but Sony do not acknowledge and I am 450 kms from point of purchase. agh!!
Rating: