Sony's W80C series of TVs for 2015 are modelled on last year's W829B, and come in three colour styles. The W805C reviewed here has a black frame, with an open-style silver mirror stand. The W807C has a silver frame and stand, and the W809C has a black frame with a matching dark chrome stand.

We like all three colour options, and the design is impressive. The ultra narrow bezel and super slimline design give a light, airy and very contemporary look, and these are televisions that will blend seamlessly into any style of room. Aluminium accents on the frame lend a touch of class, and the almost edge-to-edge picture gives the illusion of a floating image, and makes the unit more compact.

The metal stand doesn't swivel, but seems solid enough, despite its thinness. A discreet Sony logo below the screen gives subtle glows when functions are accessed.

The TV is very energy efficient too, rated A+ and using as little as 72W in its most economical mode.

A conventional remote control is supplied with the TV and an optional One-Flick remote can be purchased as an extra, for use with Smart TV.

We've been impressed by the quality of Sony's TVs for the past couple of years for all kinds of reasons, and when it comes to picture quality, the W805C delivers superbly impressive results.

The first thing to note is that this is not a UHD (4K) TV, but has a Full HD (1080p) resolution. There are good reasons why 4K is the future, but in the present, there are plenty of reasons to stick with 1080p. First up is the almost complete lack of 4K content at present. Although Netflix is beginning to stream UHD content, it's very limited, and you'll need superfast broadband to receive it. When compressed for streaming, 4K quality may not even be as good as today's Blu-Ray. Gamers too, won't appreciate 4K, as the upscaling required makes screens less responsive. So we're not at all saddened by the lack of UHD in this 50-inch TV, especially since it keeps the price down.

The W80C/W85C series is Sony's top-end Full HD range for 2015. In fact, this is one of the best 50-inch screens you can get. Despite the use of edge backlighting, there are no issues with backlight bleed, and the lighting appears uniform. The VA-type panel generates very deep blacks, and in combination with the dynamic backlight control, manages to produce quite stunning pictures with very high dynamic contrast. With a Blu-Ray source, you'll be blown away by the quality of this TV, despite its lack of 4K.

The screen is highly responsive, with a fast native response and an 800Hz Motionflow interpolation system to smooth out any jerkiness. It's ideal for gamers too, with a very low input lag when used in game mode.

Sony's X-Reality PRO engine is effective at upscaling input from standard definition broadcast, although low quality terrestrial broadcast can look rather poor when blown up to such a large size. We recommend turning down some of the motion interpolation algorithms from their most aggressive settings, as they tend to introduce unwelcome artifacts.

The TV also supports quite wide viewing angles - much better than Samsung's Series 6 range of TVs, and on a par with IPS and plasma displays. You can view the screen from very wide angles without noticing any significant loss of colour or contrast.

Overall, this is perhaps the best you can get in 1080p, and marks a high point in picture quality before the leap into UHD television. 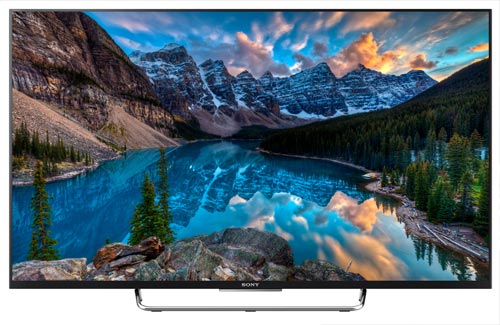 The TV is 3D-capable, and uses active 3D. No glasses are supplied with the TV, but they can be purchased as optional extras.

Audio quality is less impressive than picture quality, but by no means a problem. The twin speakers have a combined power output of 20W, and are of average size. Sony's ClearAudio+ system handles dialogue well enough, but there's little bass on offer, although the long duct speaker design helps, and we'd really recommend a soundbar or subwoofer to accompany the TV.

The headphone output doubles up as a subwoofer output, and Sony also makes a wireless subwoofer that can be added to the TV to add the necessary bass.

The W80C series brings Android to the big screen for the first time. In principle, this is a welcome move, but we want to begin this section with some words of caution. The first batch of Sony's 2015 TV range  suffered from considerable delays reaching the shops, and some of the promised features were not installed. Sony has been frantically churning out updates to the OS, but it still isn't stable.

There's always a risk in buying the first generation of a new product, and we want to highlight this risk factor before you spend your money. We hope that all the gremlins will be gone before peak demand in November, but you never know.

But assuming that it all comes together, Android TV is a welcome move. It gives you access to the world of Google Play from your TV, so you can download apps, videos, music and other content to your TV. You'll find all the usual Smart TV staples here, like YouTube and Netflix.

Android also provides features such as Google Cast, which lets you mirror content such as videos or photos from an Android phone. The TV SideView app lets you use your phone or tablet to control the TV.

Catch-up TV is provided courtesy of Youview, a user-friendly 7-day windback with content from BBC iPlayer, ITV Player, 4oD and Demand 5 displayed alongside future programmes in the Electronic Programme Guide. This feature was not present at the date of our review, but is promised soon.

The W805C excels when it comes to connectivity. Naturally, you'll find built-in Wi-Fi and ethernet for connecting to the network. Wi-Fi Direct is also supported. We're pleased to see a total of 4 HDMI connections, plus 3 USB ports and a very full range of legacy AV connections, including SCART. A Freeview HD tuner is incorporated too.

Compatibility with Android smartphones is provided via the Android operating system, and supports MHL and Google Cast for screen mirroring.

We already mentioned that the headphone jack doubles as a subwoofer output, and there's a digital audio output for connecting to a speaker system, in addition to HDMI.

Conclusion - could be a 5-star product

We don't often award 5 star ratings to the TVs we review. The Sony 55W805C would have deserved a 5-star rating if it hadn't been for the roll-out problems with Android TV. As it is, it looks like Sony delayed the release of the TV until it met the absolute minimum requirements to work, and is now in catch-up mode, releasing promised features as they are completed. We can only hope that this process is completed soon and that buyers won't be too inconvenienced by this slap-dash approach to product release.

If you want a guaranteed working product, look elsewhere (perhaps at Panasonic), but if you're prepared to take a risk and be inconvenienced in the short term, the Sony could be an outstanding product.

Asked by Nebojsa from Macedonia on 20th Dec 2016
Can you attach LG SoundBar via Optical Audio Out?

Reply by Steve from UK on 20th Dec 2016
Pretty sure you can. I have a Sony 5.1 system connected by optical.

Does this TV have the ability to output a Dolby Digital 5.1 signal?

Asked by Oliver from Macedonia on 15th Sep 2016
Which model has better picture quality?
Sony W805C or Samsung K5500?

Reviewed by Jason from United kingdom on 20th Jul 2017
Bought this TV in January 2016. Exactly as review description. Picture is outstanding.
A word of warning. I had this TV for just over a year and noticed a bleed on front middle screen. I did some quite substantial research and it turns out a lot of people have been having the same problem. This batch and some other Sony Tvs apparently are prone to what's been called PS4 bleed. Sony advised that a lot of the 50 in TV's have been withdrawn.
Rating:

Reviewed by Fred from USA on 19th Oct 2016
Beware, this review sounds too BIASED.
"Ideal for gamers..."
Cmon, Input lag is waaaaay higher than the competition. Not so horrible tho, but is there.
Rating:

Reviewed by Brian Sunderland from Ireland on 2nd Feb 2016
What about having the use remote control to surf the net. A bit out of date. Their O browser is not that great to say the least. The channels change of there own accord.
I think a Samsug tv I bought 5 years ago is better.
Yours Brian.
Rating:

Reviewed by Fred from Netherlands on 24th Nov 2015
this TV is great in picture quality, the sound quality is not that great but can be upgraded by yourself.
Rating:

Reply by Tarantys from USA on 20th May 2016
Is anyone use 3D glasses on this tv ? And what type ?
Also tv has active 3D but can we use pasif glasses?