The Samsung KS7000 may be the company's entry-level SUHD TV for 2016, but it's almost the same as the Samsung KS8000, which in turn is a flat-screen version of the curved Samsung KS9000. The point we're making is that this affordable TV is almost indistinguishable from Samsung's most expensive model - except in one area - looks.

The KS7000 is a flat screen, and here at S21, that pleases us. "The earth is flat!" we declare, to anyone who will listen. Because, while there is an argument for curved televisions, that argument hinges on positioning yourself at precisely the right distance from the screen along its central axis. If you move from that position, the curve starts to become a problem. And if you live in the real world, or if you have a friend who would also like to watch TV with you, then flat beats curved.

The KS7000 is a beautiful, slimline TV, which looks fantastic from all angles. The black bezel surrounding the screen is super thin - just millimetres in width, and is edged by silver metal, giving the TV a premium look. The metal "Branch" stand is elegant and provides good support, although you'll need a wide shelf to accommodate it.

The sales package includes a standard remote and a smart controller. 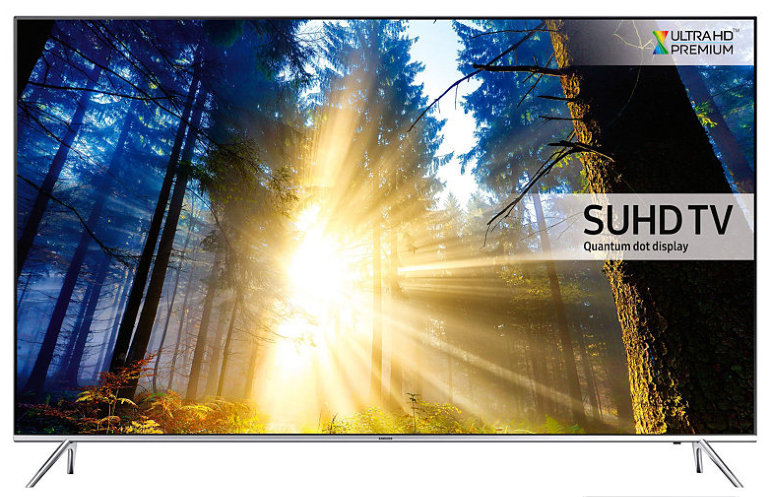 We should say first of all that not every home will have the space necessary for a 55-inch screen. But if you do, then 55 inches is definitely the size that most people seem to be aspiring to in 2016. A few years ago, 40 inches was normal. Last year, 50 inches became the most popular size, at least for S21 readers. And in the premium range, we think that 55 inches is going to be be the most popular size in 2016.

55 inches is certainly a very good size to appreciate UHD (4K) resolution, and the images on the 55KS7000 are crisp and clear. With 4K input from the new Blu-Ray players appearing this year, you'll find the detail mind-blowing.

The KS7000 is a SUHD TV conforming to the new Ultra HD premium standard, which means that it has a 10-bit colour display capable of reaching a peak brightness of 1000 nits (a "nit" is equal to one candle's worth of light per square metre.) By contrast, older LCD displays used 8-bit panels and generally only reached around 200-300 nits. This allows the KS7000 to reproduce colours much more accurately, and also to display specular highlights that better create the range of light and shadow we see in the real world.

The KS7000 is an LED-backlit TV with backlighting from the bottom of the screen. A limited form of local dimming is used to vary the intensity of the backlighting over different areas of the screen, resulting in fine shadow detail, as well as the ability to reach very dark blacks when required. The screen also incorporates Samsung's new Ultra Black moth eye technology, which helps to reduce reflections.

The screen is fully HDR compatible, so if you are watching HDR content (available from the new Blu-ray standard, or via Netflix or Amazon this year) even greater subtleties can be discerned.

This Series 7 TV also has exceptionally good motion handling. The LCD panel is fast to begin with, and Samsung's auto UHD processing algorithms remove any noticeable flicker or judder, without introducing any kind of unnatural "soap opera" effects, making this screen ideal for fast action, sport and movies. If you do find that the auto motion setting is intrusive, it's possible to override it, but we think the vast majority of people will be very happy with auto. In Game Mode, lag times are extremely low for a UHD TV.

LCD screens typically offer relatively restricted viewing angles - in particular the VA-type screens used by Samsung. However, Samsung's 2016 SUHD range performs well in this regard. Even when viewed from an angle of 30° there's not much visible decline in colour fidelity and contrast levels, but if you sit further off-centre you'll really start to notice this issue.

Samsung assigns a Picture Quality Index (PQI) to each of its TVs, which is meant to indicate just how good it is for viewing. The KS7000 has a PQI of 2100 compared with 2300 for the KS8000 model. We're not certain of the reason for this difference - perhaps it is because of minor differences in the backlighting system - and we're confident that most viewers won't be able to tell the two screens apart.

We hate to finish this section on a downer, but we have to mention that all Samsung televisions for 2016 have dropped support for 3D. So, despite everything we've said about how good the KS7000 is, if 3D matters to you, you'll need to look to another manufacturer.

One difference between the KS7000 and the KS8000 is that the cheaper model uses a more basic sound system. having said that, it's definitely superior to the typical flatscreen audio systems we're used to. This one has a 2.1 speaker system, with a separate subwoofer for additional bass. The total power of the system is 40W, giving it plenty of oomph compared to the weedy sounds from Samsung's Series 6 TVs. And the width of the 55-inch model enables the speakers to be placed wide apart, adding more depth and spatial resolution to the sound.

New for 2016, the Smart TV includes access to cloud gaming, giving you a console-like experience directly from your TV.

The quad-core processor gives a fast response, and there's a choice of two remote controls to use - a standard remote, and a new smart remote with voice recognition enabled.

The picture quality menus have been simplified for 2016, hiding many of the more advanced options, on the grounds that most people haven't got a clue how to use them. This makes it easier for most people to choose the option they want, although dedicated AV enthusiasts will need to look a bit harder.

The KS7000 has the same range of connectivity options as the Series 8 & 9 televisions, with built-in ethernet and Wi-Fi network connections allowing you to access the internet and stream content from connected devices around your home, including screen mirroring of compatible smartphones and tablets using the Samsung Smart View app. You'll find 4 HDMI connections, one with ARC support for connecting to a soundbar or home cinema system, plus 3 USB connections, Bluetooth connectivity and a digital optical audio output for connecting to older A/V devices.

The TV will automatically detect the type of device you're connecting to, and enable you to control it with the TV's smart remote. A One Connect jack helps to keep all your cables neatly out of sight.

For a budget of £1500, nothing beats the Samsung 55KS7000. The Series 7 is the cheapest of Samsung's SUHD range, but doesn't shed any key features of the more expensive models, and has the benefit of being flat. Rivals products include the LG 55UH850V, Panasonic TX58DX750B and Sony KD55XD9305. But these either cost more, or don't quite match the quality of the KS7000.

There's only one thing we dislike about the Samsung, and that's the lack of 3D support. If you're not bothered by 3D, just buy it.

Asked by John from UK on 9th Jan 2018
I have a UE55KS7000 purchased feb 2016 . in the last six months the tv has taken to switching on at random times day or night sometimes sound almost full on , which isnt very funny at 4am . has anyone got a clue whats happening here ???? i have checked software updates etc all is ok but tv continues to randomly switch !! The tv is fed by a talktalk freeview box box :)

Can you enable HDR in Game Mode? Thanks.

Reply by Imtiaz from UAE on 27th Sep 2016
Yes you can. This is the equivalent of KS8000 in the US. Check the extensive Review on Rtings dot com for confirmation.

How wide is the stand I need to be sure it will fit my TV stand?

Reply by johnnyblade from Engerland on 14th Sep 2016
Any joy with the answer with this? Ive been trying to find out myself, looks like i may have to go to the shop and just measure it!.

Reviewed by PoshSmith from Ireland on 12th Apr 2017
The Samsung LCD picture Quality is outstanding, truly stunning HDR from YouTubes 4k streams. However not a single review I read has touched on the build quality of the chassis, which is plastic. The chassis is glued, not screwed, to the panel. The LCD panel generates heat which makes the glue melt and the panel start to separate from the chassis. There are videos on Youtube showing this. I returned mine to the store, and got the Sony KD85, which is not in same league as the Samsung but has better build quality for the same price. Samsung need to review their quality assurance governance.
Rating:

Reviewed by Conrado Vinarao., Jr from Philippines on 26th Mar 2017
I got mine UA55KS7000 last March 8, 2016 Samsung unit a purchased had hidden damages though, raising the issue with Abenson Tagaytay Philippines with the support of Samsung Philippines country based both dealer and Samsung Philippine based office following its professional checking of unit review, thus recommends unit sealed in a box replacement for customer satisfaction, I would say Great Customer Service and Thank both Abenson Tagaytay Philippines dealer and its Customer Service and so with Samsung Philippines Customer service for Great Aftersales Service handling were I would rate at 4 to 5 Stars in Service performance, unit were advised to arrived via Home Delivery on April 1, 2017 ( Saturday ) Philippine time.

Reviewed by Wayne from Uk on 12th Nov 2016
The KS7000 is outstanding when watching 4K content via Netflix & Prime. HD is very good, can't wait to see how it performs with Blueray.
Rating:

Reviewed by Al from UK on 27th Jun 2016
You state that there is no noticeable "soap opera" effect. I purchased this TV a few weeks ago (prior to reading this review) and there is definitely a noticeable soap opera effect on movie content with the default settings. The good news is that it can easily be adjusted in the Auto Motion Plus settings (or use the movie preset). The judder can be adjusted in values between 0 and 10 so there should be a level to suit everyone.

The app selection is limited at present but the Samsung rep I spoke to said that more apps would become available in August 2016. We shall see.

However, I agree with your conclusion that it is a very nice TV for the price.
Rating:

Reviewed by Chebo from Mexico on 20th May 2016
I bought this TV 2 weeks algo, and i only found a flaw that i dont know why Samsung still dont fix, web browsing is poor because you cannot access pages like twitch to watch streaming videos, this is something LG tvs can do, but samsung cant. Another flaw is Samsung ks7500 have very few apps, so i dont think this is a great choice for a smart TV. If you want a great smart TV with tons of apps, buy Sony 850D.
Rating: