For a mid-range TV, the KU6400 looks good. With a narrow black and silver bezel surrounding the screen, a metallic bar across the lower edge, and a stylish and practical Calyx quad-stand, it will blend into any setting. The slim chassis with its textured rear finish looks good too, should you ever feel the need to stick your head around the back to take a look.

Just a couple of years ago, 40 inches was Britain's most popular TV size. Now, 50 inches is the sweet spot, so this 49-inch model is positioned right in the mainstream. In the shop, this TV probably won't look particularly large, but when you get it home you might be surprised just how big it is, if you're used to something smaller. No doubt you'll adjust to the new size fairly quickly, and this is really a very good size for family viewing.

Although most broadcast TV is still HD (and plenty of Freeview channels are still standard definition), 4K is definitely the way to go, especially for a screen this big. The KU6400 does a good job of upscaling 1080p content to 4K, so Freeview HD programmes and your Blu-Ray disks will look pretty sharp on this screen. Even high quality DVDs upscale well, but those standard-def Freeview channels are going to look a bit blurry on a screen this big. To get the best out of this TV you'll be signing up to Amazon 4K, Netflix 4K, or buying one of the new (and currently very expensive) UHD Blu-Ray players.

With high-quality source material, the KU6400 does an outstandingly good job for a mid-range model. The dynamic range is impressive, with deep blacks, bright highlights, a wide colour gamut, and impressive amounts of shadow detail. It's hard to think of another mid-range TV that can match it.

The KU6400 also supports the new High Dynamic Range (HDR) format, which means that it can read the extra information encoded with HDR source material.

Although this is a native 50Hz screen, Samsung's Auto Motion Plus system automatically optimises motion, giving smooth judder-free movement without looking over-processed or artificial. That makes this TV a good choice for sport or movies.

Many of Samsung's mid-range TVs have traditionally suffered from poor off-centre viewing. However, its 2016 range generally seems much better in this regard, and the KU6400 offers wide viewing, so even if you're perched on the edge of the sofa, contrast levels and colour saturation remain relatively high.

Overall, this is a hugely impressive performance, and the only thing missing is 3D support. That's because Samsung has removed 3D support from its entire television range for 2016. 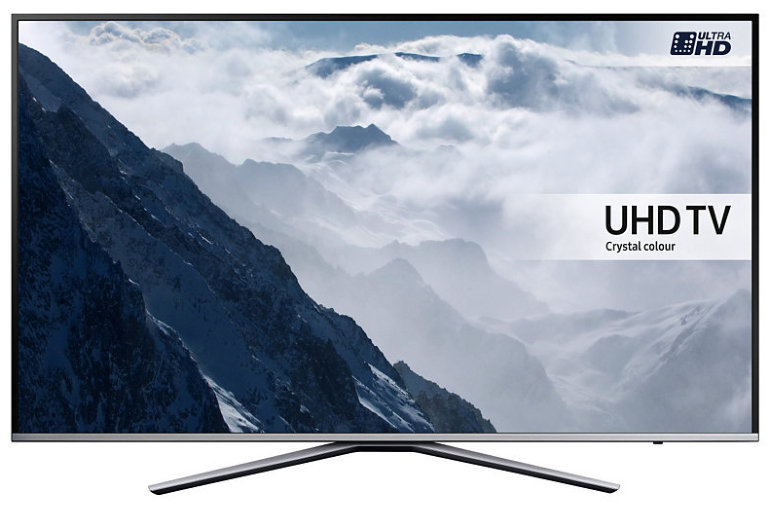 The downside of modern flatscreen televisions is that there isn't a lot of depth to accommodate speakers. The 6400 has typical performance for a mid-range model, with stereo downfiring speakers, each with just 10W of power. Mid-range frequencies are reproduced well enough, so dialogue is clear, but there's a distinct lack of bass, resulting in a flatness during movies.

We'd thoroughly recommend a soundbar or some other kind of external speaker system if you want to enjoy this TV to the full.

New for 2016, the Smart TV system includes access to cloud gaming, giving you a console-like experience directly from your TV.

The quad-core processor gives a fast response, and this really is a very comprehensive Smart TV system.

The Samsung KU6400 has 3 HDMI ports, one with Audio Return Channel (ARC) compatibility for connecting to a soundbar, 2 USBs, an optical audio output, a combined composite/component input, a CI+ 1.3 slot, and Anynet+ support. It also includes built-in Wi-Fi and ethernet, and supports screen mirroring from smartphones and tablets.

The only problem you might have is that there's no SCART connection, so if you have an old DVD player or Sky box, you'll need to upgrade it.

Conclusion - one of the star products of 2016

The Samsung UE49KU6400 looks set to be one of the biggest-selling televisions of 2016. It's a superb mid-range TV, with a combination of attractive design, big screen size, superb picture quality, and outstanding Smart TV functions. UHD and HDR support make it future-proof.

The 49-inch KU6400 launched at around £800 at the beginning of 2016, but is already selling for a lot less. The sheer number of retailers selling this model means that competition is fierce. Watch the price continue to fall as we get closer to Black Friday 2016 and Christmas, and grab yourself a bargain!

The Samsung KU6470 is almost identical to the KU6400, and is exclusive to Currys / PC World. The KU6470 has a different stand and a different remote control, with support for voice recognition, but the KU6400 offers better value.

How do you make movies fit full screen and not have black line at top and bottom?

Asked by Gabriel from Argentina on 27th Aug 2017
The UN50KU6000 is cheaper than this model so I wanted to know why. Im trying to buy a tv with a limited budget but keeping in mind an extra sacrifice is worth as long as it is efficient.

Reviewed by Lee from U.K. on 31st Dec 2016
Having brought this TV picture is outstanding but my biggest gripe at the moment is the issue with the HDMI ports playing up to the point I have to take the plug out and reset the TV and this happens every other day. You put the DVD on or sky box and it says there is no signal. Tried swapping the leads the ports but still the same. Also checked to see any software update none it looks like software issue but wondered if anyone else experienced it.
Rating:

Reviewed by Hugo Rafael from Portugal on 10th Dec 2016
I there, sory for the bad inglish.

I have bought the tv this week, and i can´t send the image from the Pc to the TV.

In the connectivity sais that suport screen mirroring but i can´t find it.

Can anyone help me ?

Reviewed by Rich from Uk on 18th Nov 2016
Bought this after many visits to the local shops, reading online reviews, etc. Absolutely delighted with my decision to purchase the KU6400. I have not experienced any problems with judder while watching football. So far have only watched regular channels and HD, but am looking forward to trying 4k. Linking to wifi, samsung dvd player, not a problem. Apps are good, but can't find spotify yet. Great sound too, even with no a soundbar.
Rating:

Reviewed by Mike from UK on 13th Nov 2016
Contrary to the heading of this review, this TV does NOT come with iPlayer* or any of the catch-up services. It is now (from October 2016) approved by the BBC for iPlayer, but until a software update comes along from Samsung the catch-up services remain unavailable.

That disappointment apart, it is a fantastic TV.

The picture quality is excellent : good quality HD (e.g. Planet Earth II) is amazing and even SD quality is happily watchable. (I don't have a 4K source, so haven't tried that yet).
Motion (e.g. football) is perfectly OK.

The sound quality in "Clear Voice" is very good for general programs, but a bit "thin" for films so I still use my surround sound amp at times.

* I think that the iPlayer logo is embedded in the in-shop demo mode (having seen it in JL), but when you get the TV home and put it in home mode, iPlayer has gone!
Rating:

Reply by Mike from UK on 13th Dec 2016
Following the recent firmware updates AND AFTER RESETTING THE SMART HUB!!! iPlayer and My5 are now available.
ITV Hub is there too, but it doesn't seem to work.

Reviewed by RichaAllen from UK on 17th Aug 2016
I recently purchased this TV based on all of the good reviews but I have to say that I'm a little disappointed.
I cannot comment on the 4K picture quality yet however on HD I find that the image looks a little over processed.
Motion is not as well controlled as I would like with definite signs of digital manipulation.
Whilst viewing a shot with a single colour with motion across it (Cycling on the velodrome during the Olympics)you can see slightly different shade bands running up the screen from the cyclists as though the bottom lighting of the panel is struggling to correctly light the screen.
Rapid motion across the screen also results in significant blurring, which I know from previous tvs I am in particular very sensitive too.
As with most Samsung TVs I find the colours to be a little bright for my tastes but I think others find this less offensive.
The smart functions and control of the TV is very good.
Rating:

Reply by Brian Hooper from England on 23rd Oct 2016
Hi
Can you record tv programs?
Thanks
Brian