In a nutshell: The Samsung Galaxy Tab S2 8 is an ultra-lightweight and superslim tablet with an incredible high-resolution AMOLED display and an 8-core processor. With a good camera and all-round connectivity, it could just be the perfect tablet. But its killer feature is something many will overlook - 32GB of memory plus a memory card slot is a major advantage over the iPad Mini 4.

The Galaxy Tab S2 8.0 is the Android tablet that's going head to head with Apple's iPad Mini 4. In our recent review of the iPad, we praised its "impossibly thin" and lightweight design. How then to describe the Tab S2, which is even slimmer and lighter? It really is a phenomenon.

Measuring just 5.6 mm in thickness and weighing in at a featherweight 265g, this is the lightest, thinnest tablet we've ever seen. It's a dream to handle, seeming to weigh almost nothing. And despite being almost paper-thin, it feels very strong. Samsung has pushed its designs into the premium arena, and the Tab S2 has metal edges and a smooth, rigid plastic back with an easy-grip matte finish. The screen is protected by Gorilla Glass.

The home button incorporates a fingerprint sensor, which can be used to unlock the tablet, and to enable access to the web browser and your Samsung account. 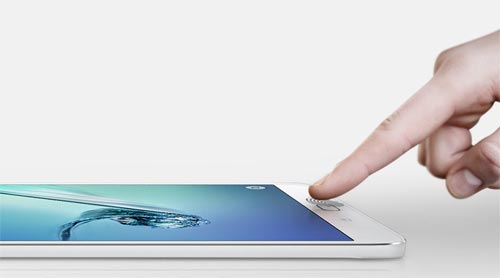 If we have any criticism of the design at all, it's that the thin edges to the left and right of the screen are almost too thin, and an extra millimetre would make the tablet easier to hold. The sound from the tiny speakers is also as thin as you might expect. But we're - quite literally - splitting hairs. As we said, the Tab S2 is almost the perfect tablet physically.

The screen is amazing too. With an ultra-high resolution of 2048 x 1536 pixels fitted into an 8 inch screen, the screen specs are an exact match for the iPad Mini 4's Retina display. But the Tab S2 has the advantage of using Samsung's AMOLED technology, which has higher native contrast levels than LCD displays, and is also responsive and fast. It's a killer screen and a key selling point of this tablet.

The Tab S2 runs Android 5 Lollipop, plus Samsung's TouchWiz user interface. The total number of Android apps recently passed the 1.6 million count, compared with 1.5 million for iOS, so there's now no reason to choose iOS over Android, apart from personal preference. The TouchWiz modifications aren't to everyone's taste, but they've been a feature of Samsung's Android phones and tablets for years now, and are well-tested and often useful. One of our favourites is the multi-screen option for easy multi-tasking.

Despite being a compact tablet, the Tab S2 8 isn't short of power. On the contrary, it packs a real punch, with an octacore processor and a massive 3GB of RAM. The 8-core processor uses a "Big Core" 1.9GHz quadcore plus a "Little Core" 1.3GHz quadcore configuration, combining processing power with energy efficiency. What this means in practice is that the tablet runs super-smooth with apps quick to open, and stutter-free video streaming. Even demanding 3D games can be played without any issues.

Another major advantage of this tablet is that it comes with a very generous 32GB of storage. Even better, you can add a microSD card to gain up to 128GB more memory at relatively little cost. You shouldn't underestimate the importance of this, as a tablet can fill up with apps, videos, music and other media very quickly.

The Tab S2 is one of the few tablets that's compact and light enough to be realistically used as a camera. Fitted out with an 8 megapixel main camera, it can take some pretty impressive shots.

The main rear-facing camera uses a particularly wide f/1.9 aperture to capture as much light as possible. It also has a HDR mode, for enhanced low-light performance. It can take bright, well-exposed shots even in quite low lighting conditions, despite not having a flash. It can record video at resolutions up to QHD - 2560 x 1440 pixels.

The front camera uses a 2.1 megapixel sensor, and is good for selfies or video chat.

To put this in context, we'd say that this is one of the best tablets for photography, but it can't match the quality and versatility of top-end smartphones like the Galaxy S6.

There are two versions of the Tab S2 8 - a Wi-Fi version and a Wi-Fi plus 4G model. We've been reviewing the Wi-Fi only version, which offers a very wide range of connectivity options. Not only do you get the basics of fast Wi-Fi, Bluetooth 4.1, USB 2.0, and a 3.5mm audio jack, but you also get GPS and Glonass positioning, plus MHL and ANT+.

The AMOLED screen and octacore processor are very frugal when it comes to power usage, but even taking that into account, we're nervous about the capacity of the 4,000mAh battery in the Tab S2. This is small.

And yet, in the real-world, you can squeeze almost 10 hours of intensive use out of the Tab S2. Whether streaming movies or playing games, the battery holds up. If you typically use the tablet for a few hours a day, then you'll get several days out of it between charges.

Conclusion - the biggest challenge to the iPad Mini 4

Samsung has delivered an outstanding product with the Galaxy Tab S2 8-inch model. It really is outstanding in every way, with no weak areas. We're in love with its super-lightweight slim design and its superb AMOLED screen. The 8-core processor handles anything you can throw at it, and with 32GB of memory plus a microSD card slot, it has far more storage than most rival tablets. The camera is good, and the battery life seems to hold up, despite our initial concerns. In short, there's nothing not to like, but plenty to love.

The big question is: Apple iPad Mini 4 vs Samsung Galaxy Tab S2 8.0 - which is better? For us, it's quite possibly the Samsung. The capabilities of these two devices are almost a match, with the Samsung being thinner and lighter than the Apple, but with iOS 9 beating Android Lollipop when it comes to ease-of-use. However, the Samsung costs the same as the base model of the iPad, and offers considerably more memory. For that reason, if your budget is £320, we'd choose the Samsung. 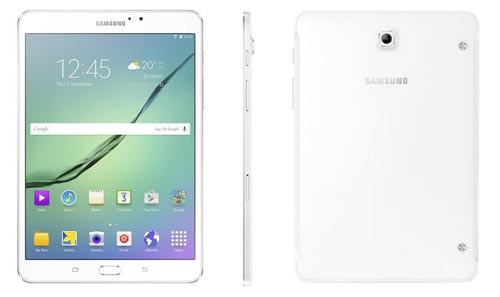