The Galaxy S7 and S7 Edge are set to be the biggest Android phones of 2016. And it's the S7 Edge that everyone really, really wants. But the Edge costs about £70 more than the S7, demands a bigger pocket, and shares 99% of its DNA with the standard S7. So is it worth it?

Your head may tell you to pick the S7, but your heart urges you to go for the S7 Edge!

At the cutting Edge - again

One year ago, Samsung pleased us with the all-metal-and-glass design of its Galaxy S6 phone, and wowed us with the curved screen of the S6 Edge. Although the Edge didn't do much more than the normal S6, it looked so futuristic and sexy that we just couldn't stop playing with it. But it was hard to justify paying the extra £100 for the Edge design, even though it was just as hard not to resist its lure.

This year, things are different. The Edge is edgier. And significantly bigger. That £100 price difference doesn't look like such a big deal this time round.

Whereas the Galaxy S7 isn't very different in design to the S6, the S7 has changed significantly, and all for the best. It's bigger, with a show-stopping 5.5 inch screen, is waterproof, and has a reworked shape, with curves that make it easier to hold despite its increased size. 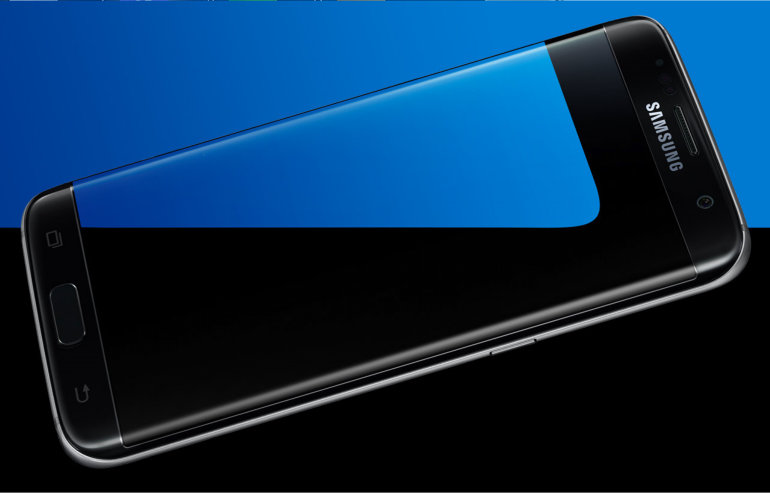 Yes, it's a big phone to handle, and heavier than last year's model, but it's slightly slimmer than the S7 and only a few grams heavier, so it actually feels lighter. The rear camera is much more flush this time, fixing one of the minor gripes we had with last year's design. And the S7 Edge is water-resistant, conforming to the IP68 standard.

That display is simply stunning in every way. 5.5 inches is exactly the same size as the screen on the Apple iPhone 6s Plus (surely no coincidence?), but where the Apple has a mere 1080p resolution, the S7 Edge has a Quad HD display with a much higher 534 ppi pixel density (the 6s Plus has 401ppi). And as always, Samsung's Super AMOLED technology renders unbelievably sharp, saturated and detailed images.

The phone supports one-touch fingerprint recognition, and comes in a choice of Gold Platinum, Black Onyx or Silver Titanium.

Update (21 February 2017): The other colours are now joined by a Blue Coral version, and the price has been reduced in readiness for the launch of the Galaxy S8.

The Edge may still be to some extent a gimmick, but Samsung has worked hard to give it new functionality this time round, with more apps accessible from the edge, and greater productivity and shortcuts. It now gives you an Apps Edge, a Task Edge, and a People Edge, with handy features like a ruler. The display is always on, showing notifications and the time and date. 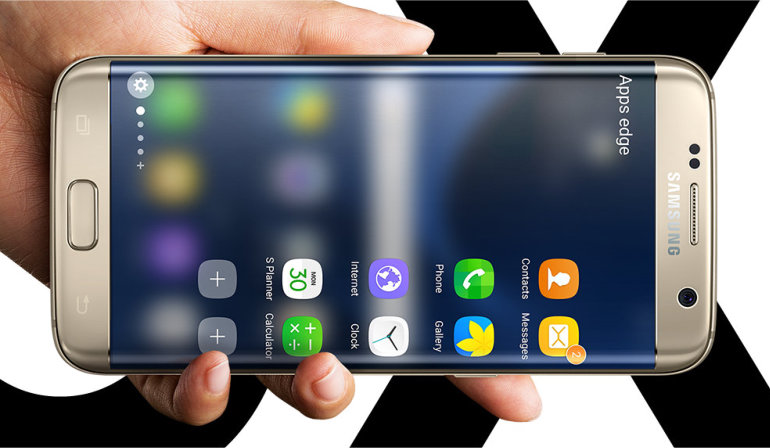 Apart from the curved screen and larger size, the S7 Edge is mostly the same as the S7. Read our S7 review to find out more. In summary the features are:

The new Samsung GearVR is designed to work with the Galaxy S7 to give a virtual reality experience. This promises a rich and immersive gaming and entertainment experience. 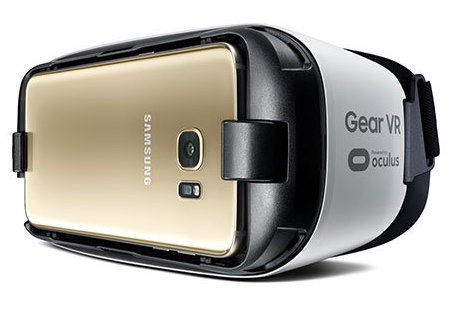 Conclusion - even more of an Edge

Last year we agonised over whether to recommend the S6 or S6 Edge. The Edge was the one we preferred, but the extra price was hard to justify on any rational basis. This year, the balance has shifted in favour of the S7 Edge over the S7.

The Edge costs £100 more, but gives you a truly big screen experience, plus a bigger battery to keep it going throughout the day (or several days.)

The S7 Edge is a worthy upgrade to the S6 or S6 Edge. As well as the stunning design and screen, it brings a number of refinements that are all well worth having - the faster processor, the memory card option, the enhanced photography and the bigger battery. Samsung has taken a phone that was close to perfection, and refined it further. We couldn't really ask for any more.

Will there be an official Cyanogen Mod Rom For Galaxy S7 Edge?

Asked by John Augustine from Pakistan on 17th Nov 2016
Is there any chance to get any official support from CM rom for Galaxy S7 edge exynos version.
Please really need to know.

Reviewed by Brian from United Kingdom on 25th Jun 2018
This is possibly the worst mobile phone I've ever had, unreliable, unpredictable and untrustworthy. The first screen went after 3 months, the replacement is now on the blink. The phone changes settings and makes calls of its own accord, and the edge screen is just a pointless gimmick which makes it tricky using the virtual keyboard.
Rating:

Reviewed by Bob from UK on 1st Nov 2016
Upgraded from my S5. Far better in every department. One finger touch access every time. Totally customisable and using Samsung Smart Switch transferred everything from old phone in just 10-15mins. Gone and bought wireless fast charger for the icing on the cake.
Rating:

Reviewed by Akaash from India on 24th Sep 2016
I have this phone from last three months and it was working excellently but yesterday i seen horizontal lines appears on my screen and after been checked by tech. he says the LCD has become faulty.
I have never dropped or put any pressure on screen and then i google read many complaints there regarding same screen issue, as mine device is not in warranty and the charges of new LCD replacement is almost 35k so i am very disappoint by quality of this device as now Samsung seriously have to look into this as their flagship devices are encountering swear quality issues like Note 7 have battery issues due to which device caught fire...... A real disappointment :-(
Rating:

Reviewed by John Edward Rothschild from Ireland on 31st Aug 2016
Truly the nicest & sexiest phone on the market, it's a thing of beauty and feels so good in the hand. Internals are lightning fast and smooth. Camera is top quality and screen is stunning. The only issue I have is accidentally touching the screen at the sides when holding it and this can cause you to accidentally scroll up or down or click on an unwanted link, that being said, I still award 5 stars. The edge series is what one would have expected Apple to create going back a few years, after all, Apple were the innovators but sadly have taken the foot of the gas in that regard.
Rating:

Reviewed by roger.stark. from yeovil on 25th Aug 2016
This is the way to go. A solid game changer. Nothing to compare to this phone. Very nice.
Rating:

Reviewed by Waxy from Uk on 27th Jul 2016
Had the S7 edge 32gb..
Amazing battery life was the main thing for me and the s7 edge certainly did exceeded that expectation . The phone is a thing of beauty itself when holding it and looking at it . Light, slim, curved and looks amazing . Blazingly fast with not lag at all . So far the best phone of 2016 IMO. Only reason I sold mine was to buy the Note 7 which will be launched in 6 days .
Rating:

Reviewed by Butz from Germany on 30th Jun 2016
A stunning device am great happy with my purchase, beauty with full performance also it has water and dust proof feature so i will take it to pool as well and takes superb pics in water too :-)
Rating:

Reviewed by Zack from Indonesia on 30th Jun 2016
Its totally awesome best camera and performance with great battery life, i purchsed a month before and enjoying life with this mobile.
Rating:

Reviewed by Haris Khan from Pakistan on 25th Jun 2016
Simply awesome mobile in all aspects with amazing battery timing.
Rating:

Reviewed by Tony from UK on 6th Apr 2016
Bought this phone as a replacement for my LG G4, the overall build is top quality and the screen is the best I have seen. But the speaker is very tinny and the camera cannot match the lg g4 for quality or zoom.

The battery life on the s7edge is excellent also.

Overall I do not think its worth the 62.00 with three.
Rating:

Reviewed by Neil from ENGLAND on 25th Mar 2016
Bought this phone on Thursday, so far this is by far the best smart phone I have ever owned and I've owned just a few! I bought outright which was expensive, but cheaper than a long contract. The screen is superb with great colours and clear and the edges are worked in really well. The screen always on tech is handy to see notifications at a glance (not to take Microsoft's glory) and easily interact with them. So far battery is great, the processor is very powerful and that 4 gig of ram really packs a punch. This is a phone I fully recommended and would give it 6 stars if I could!
Rating: