Samsung has enjoyed huge success in the first part of 2016 with the mid-range Samsung J5 phone, and now the J3 looks set to pick up where the J5 left off, driving prices down further. Initially available on the Three network, the Galaxy J3 is rolling out in the UK and should be available on PAYG deals shortly. A dual-sim version is also expected, and will be available sim-free.

The J3 shares the same basic design as the J5, with a very lightweight plastic construction and a slim, rectangular shape with carefully rounded corners for easy handling. With a 5 inch screen, the phone is a good size, with a plenty big-enough display, but not too large to slip into a pocket.

5 inches is a very good size screen for a phone this cheap, and what's more it's one of Samsung's superb high-definition Super AMOLED screens. Super AMOLED technology puts this phone ahead of rivals that use LCD displays, as it's bright, with wide viewing angles, and excellent colour saturation and contrast. It's a Full HD 1280 x 720 pixel resolution screen as well, with a sharp pixel density of 294ppi.

The J3 is available in a choice of Gold or Black, both of which feature a stylish two-tone design. 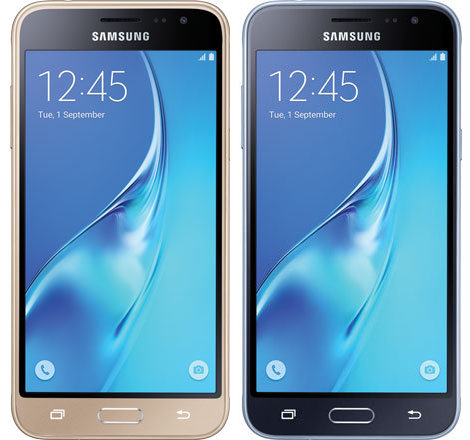 The J3 has very similar performance to the J5, with four Cortex-A7 cores running at 1.2GHz, and with a moderate 1.5GB of RAM. This gives it more power than quite a few rivals in the mid-range sector, and the J3 isn't laggy. We wouldn't recommend it for 3D graphics, but for most popular games and apps, it runs without a hitch.

One area where you will have to compromise is with storage. The J3 has a limited amount of storage built-in - 8GB, of which 6GB is available for storing apps and other user data. We'd recommend adding a microSD memory card for storing music, video and photos. These are available for very little extra cost, and the phone can work with cards up to a maximum of 128GB, which is massive.

The one area where the J3 has a lower spec than the J5 is its rear camera. This is more of a budget model, with an 8 megapixel resolution, compared with the J5's 13 megapixel camera. The camera still includes autofocus, HDR mode and an LED flash, and can record HD video too.

Double-clicking the home button from any screen opens up the camera app, so you can easily grab a photo, no matter what you're doing.

A front-facing 5 megapixel camera is available for taking selfies, and video chat.

The Galaxy J3 supports 4G networks, and is compatible with Three's brand-new 4G Super-Voice calling. Super-Voice is another name for Voice over LTE (VoLTE), which utilises the extra data-carrying bandwidth of a 4G network to improve the quality of voice calls, and giving better network coverage.

Additionally the J3 supports all the standard connectivity options - Wi-Fi b/g/n (2.4GHz), Bluetooth 4.1, GPS, USB and a 3.5mm jack for plugging in headphones.

The J3 has the same size battery as the J5, at 2,600mAh. This is a heavy-duty battery for a phone with these specifications, and even heavy users should get two days of use between charges. Light users may find they only need to charge the phone every 3-4 days.

If the battery is running low, you can engage Ultra Power Saving Mode, to stretch out that last bit of juice until you get home. The battery is removable too, so can be swapped for a replacement.

Entry-level smartphones that get it right are rare. Usually too many corners are cut, resulting in a frustrating experience. But the J3 does well at getting the balance right.

It's slimmer than most budget phones, and light in weight too, but with a big 5 inch screen. That screen is far from being a budget offering, with its AMOLED tech delivering impressive, sharp images and easy-to-read text. The phone has a quadcore processor that's good for everyday tasks and popular games, plus a heavy-duty battery that will last. The camera is fairly basic, and the 8GB of memory is less than we'd ideally like, but for a phone costing not much more than £100, it's a compromise that we're willing to make.

If you want a better phone, you should be prepared to spend considerably more. In fact, we're struggling to recommend a better alternative. Check our Samsung J1 review if you'd like a cheaper option.

Reply by Val from United Kingdom on 11th Jul 2018
One sim only and are memory card.

I feel my pictures aren't as clear as they were at the start. Very dull and quite blurry?

Accessibility - do I get a choice of font size? I have low vision.

Reviewed by Val from United Kingdom on 11th Jul 2018
For the price this is a good phone - but you only get what you pay for! My big criticisms are: 1) The storage of 8gb is MUCH too small - in this day and age everyone needs a lot of room. The memory card helps but it won't store most apps I want to download and I resent having to be very choosy about which apps I can keep. 2) The battery gets used up VERY quickly and takes AGES to recharge. Apart from the varying minimal grumbles I experience with every phone I've had in the last 26 years this one will do until the opportunity arises to change to a phone with a lot more storage!
Rating:

Reviewed by Peter from United Kingdom on 25th Mar 2017
Bought the J3 as an upgrade to my galaxy fame which came free with 2 year contract and was my first Samsung .Wow what a difference , had the J3 for 3 months now and i can't fault it ,it does everything i need and i would recommend it thoroughly .
Rating:

Reviewed by Nicola P from U.K. on 11th Oct 2016
Phone broke after 35 days. Was collected the next day for repair but heard nothing. 5 days later after 40 minutes on the phone I'm told that I'll be £159.16 to repair it even though I have no idea how it was damaged and it's always in a case. The first contact at Samsung suggested over heating. I pointed out to the customer care lady that the repair cost is more expensive than buying a brand new phone but apparently there's nothing she can do. And to cap it all, to have my phone returned I need to phone Samsung customer support again!
Rating:

Reviewed by Skonrit from Polska on 9th Oct 2016
After buying the Samsung Galaxy J3 following trouble detected: the camcorder to charge 30% do not work, it has to be recharged, but it takes a lot of time. When charging is heated. After switching to the second SIM-card dialing takes too much time. The device is heavy, when the long time to boot, not easy to use with one hand, the speaker is not loud.
Rating:

Reviewed by Steve from UK on 4th Sep 2016
Just bought this phone yesterday as a PAYG upgrade from my S4 mini on 3. I chose a gold one, as a change from the usual black or white. It has more advanced specs than the S4 mini, & is a faster phone in general, at a cheaper price- £120 as opposed to £130 for the S4 mini 18 months ago. It charges quickly too, about a hour from empty. Very good HD screen, good clear sounds too. So far I'm pleased with this phone. & it looks ace in gold! Not tried the camera yet, but I expect it will be as good as that on the S4 mini, which is very good.
Rating: