An enhanced version of the A3

The new Samsung Galaxy A5 (2016) is a souped-up version of the Samsung A3 (2016 edition) The A5 is a phone with premium looks, built with an aluminium frame and covered front and back in Gorilla Glass. It's a beautiful look - similar to the Galaxy S6 - but watch out for fingerprints. The A5 is larger than the A3, and quite a lot heavier, but still ultrathin. Its extra width and weight means that it's not so easy to use single-handedly. One feature that the A5 has that the A3 doesn't is a fingerprint sensor built into the home button.

The screen here is bigger than on the A3 - at 5.2 inches - and is a Full HD AMOLED display that's incredibly sharp and vibrant. 5.2 inches is even larger than the Galaxy S7 flagship phone, so this is a superb screen for viewing websites, apps, photos and videos. It's a truly impressive display.

The A5 comes is a choice of colours - Black, White or Gold. Whichever one you choose, you can be sure that you're buying one of the nicest-looking smartphones of 2016, and one that can hold its own against many of the premium-priced flagship models, at least in terms of design.

The A5 comes with an 8-core processor, which is twice as many as the A3, but the clock speed is only a little faster, at 1.6GHz. In most cases, the additional processing power doesn't make much noticeable difference, but that doesn't mean it's slow. While this falls quite a bit behind the 2.6GHz used in the Galaxy S7, in practice it's a competent performer, handling most apps with ease. The 2GB of RAM is enough for you to swap between apps without much of a lag, and the GPU is fast enough to play most 3D games at high frame rates too.

The A5 is equipped with a reasonable 16GB of memory. Of this, about 10GB is available to the user, but you can add to this with the microSD memory card slot.

The phone runs Android 5.1.1, with Samsung's usual TouchWiz modifications on top. There are a fair number of small mods included, and some third party apps, some of which are useful, such as Microsoft Office apps.

The A5 has the same set of cameras as the A3. The rear camera has a 13 megapixel sensor, with autofocus, HDR mode and an LED flash. In full daylight it performs well, and even at night its wide f/1.9 aperture and bright flash are quite successful at producing decent shots, although these can be a little grainy, and the autofocus isn't always accurate in low light. Video recording is at 1080p HD resolution.

The front fixed-focus camera is good enough for selfies, with a 5 megapixel resolution, and a wide selfie mode. Results are excellent in good lighting, but less impressive in dark conditions. 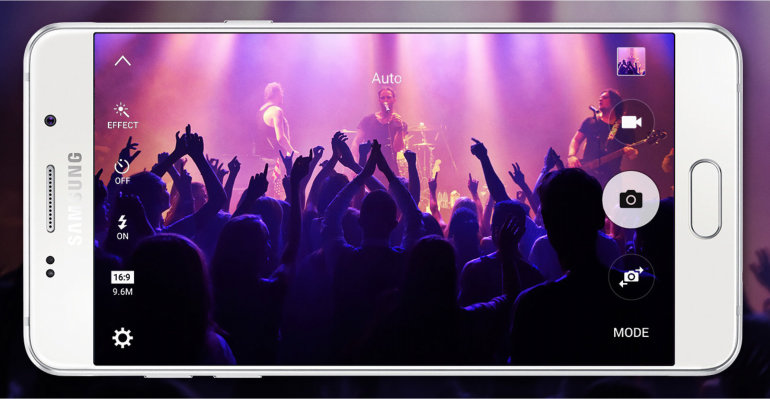 Like the A3, the A5 is 4G capable, with Wi-Fi, Bluetooth, NFC, USB and ANT+ connectivity. It also includes GPS and Glonass location services. In contrast to the A3's single-band Wi-Fi, the S5 supports faster dual-band Wi-Fi.

The battery life of the A5 is impressive, thanks to a 2,900mAh battery. This is substantially bigger than last year's A5 and this year's A3. It's a good battery for the spec of the phone, and gives up to 16 hours of continuous use. As with the A3, the battery is not removable.

The Galaxy A5 has the premium looks of a flagship phone, but for less money. At launch it was over-priced, but has now fallen to a much more reasonable price, and we highly recommend it.

Other options worth considering are the Huawei P9 and Samsung S5 Neo.

Samsung Galaxy A5 2016 features include:

Reviewed by Andy from UK on 29th Oct 2016
I have upgraded from a Galaxy Alpha which I thought was a very good phone but the battery life was poor, this phone is very similar spec wise but maybe a slightly worse processor and no heart rate sensor or notification light but it has a bigger 5.2 inch screen and the battery life is brilliant, this was the main reason for wanting this phone. I managed to get this on a £15 a month contract with enough minutes and data so can't understand the bad review from S21 saying it is over priced unless this has recently changed.
I would recommend this phone for people who want a flagship but can't justify the price, the only compromise I can see is the 2GB of RAM which does slow things down when multi tasking.
Rating:

Reply by S21 from UK on 31st Oct 2016
Andy, thanks for alerting us to the fact that this phone is now a lot cheaper than when we first reviewed it. We've updated our review accordingly, and upgraded our rating from four to five stars.