The two phones look almost the same, and are virtually the same size, with the Plus version being just millimetres longer and wider. The metal coating and diamond-cut finish lift the appearance of the device above older Moto G series phones, and the phone is nice to look at and handle.

The home button is a physical button below the screen, incorporating a fingerprint sensor, and there are neat, though rather small, buttons ranged along the right edge. The phone features a a water-repellent coating to provide some protection from splashes. The handset is available in a choice of Lunar Grey or Fine Gold.

The IPS screen has been bumped up from 5 inches to 5.2 inches compared with the Moto G5, with the same 1920 x 1080 pixel resolution making it almost as sharp as in the original. The display is bright and clear, but not as rich as the Samsung Galaxy A5 (2016). 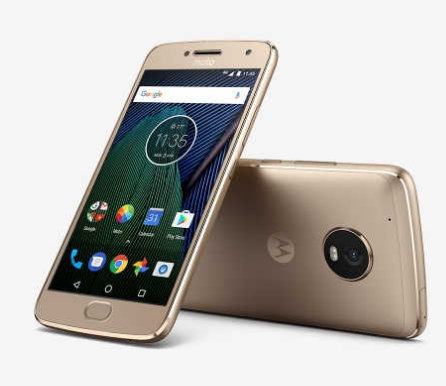 The basic Moto G5 runs moderately quickly, but the G5 Plus picks up the speed considerably with an 8-core 2GHz Snapdragon 625 processor, with 3GB of RAM available too. The GPU is an uprated Adreno 506. This configuration gives the phone very impressive performance for a mid-range device.

The flash memory has also very usefully been upgraded to 32GB, with a microSD card slot also available. This alone might make it worth choosing the Plus version instead of the basic G5. We understand that there is also a version with 64GB available.

The phone runs a relatively clean version of Android 7 Nougat. Moto Actions offer quick gesture-based shortcuts to common functions, such as twisting your wrist to open the camera app.

Overall, the processor speed and memory of the G5 Plus is as good as any you'll find for the price.

The G5 Plus incorporates a 12 megapixel camera instead of the 13 megapixel model in the G5. That may sound like a downgrade, but in fact the G5 Plus has better camera performance, with a wider f/1.7 aperture to capture more light. Otherwise, the camera is largely the same as in the G5, with auto HDR, phase-detect autofocus, LED flash and digital zoom. It can record HD video at 1080p resolution and 30 frames per second, with digital video stabilization.

The front camera uses a 5 megapixel sensor, with a wide angle lens designed for group selfies.

The G5 Plus is a 4G phone, with dual-band Wi-Fi, assisted GPS & GLONASS positioning, Bluetooth and USB, plus a 3.5mm audio jack. A variety of sensors are included, such as a gyroscope and accelerometer.

The G5 Plus has a slightly larger battery than the G5 - 3,000mAh instead of 2,800mAh. With a larger screen and a faster processor, battery life will be similar - enough for one day of typical use, but probably not two full days. But the phone is fast to recharge.

We gave the G5 four stars, describing it as a safe buy. The G5 Plus manages to pull a 5-star rating from us, thanks mainly to the faster processor and extra memory that lift the performance of this phone from good to outstanding. The extra power will not only make the phone more enjoyable now, but will keep it going through the life of a typical two-year contract. If you're looking for a mid-range option, the G5 Plus is an obvious choice, giving you a lot of phone for your money.

It's not the only option though, and in fact you're spoilt for choice in 2017 at this price range. Take a look at the Huawei P9 Lite and Samsung Galaxy A5 (2016) before making your final decision.

Motorola Moto G5 Plus features include:

The G5 plus has NFC im pretty sure. i just cant see it here under connectivity. im a wrong?

Asked by Luis from United Kingdom on 7th Sep 2017

Reply by Andy from UK on 18th Nov 2017
You're thinking of the updated model the G5S+ which has NFC.

Reply by Dr Bosco from Uk on 22nd Nov 2017
Moto g 5 plus has nfc if supplied through UK dealer but NOT in USA so check your sourcing !