In a nutshell: The Microsoft Lumia 550 is an entry-level phone running the Windows Phone 10 operating system. Available for around £100 and on the cheapest Pay Monthly contracts, it offers the basic features required from a smartphone, but is limited by a slow processor and a lack of apps.

We recently reviewed our first Windows Phone 10 smartphone - the high-end Lumia 950 phone - and now we're taking a look at the much cheaper Lumia 550 phone. Priced at around £100, or available on the very cheapest contracts, this shares the same WP10 operating system, but is a very different style of phone.

Although there are similarities in design, the 550 looks and feels much more like a budget phone. Similar in appearance to the Lumia 640 phone, it's finished in shiny polycarbonate, and has very basic styling. It's slightly smaller than the 640, but thicker. In fact, with a thickness of 10mm and no effort to mitigate this with tapered edges, it's quite a stodgy little phone, although not particularly heavy.

The screen is a good size, with a diagonal of 4.7 inches giving plenty of room for the 3 column layout of the home screen, and is good for video and apps. It's a HD display, which is a relative rarity at this price point, but it's not a particularly bright or clear screen. Still, it's better than most other phones costing £100. 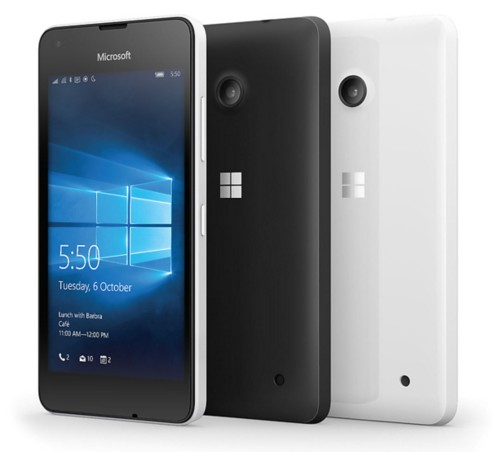 Like the Lumia 950, the 550 belongs to the first wave of phones to run Windows Phone 10. WP10 keeps much of what we liked best about WP8. Live Tiles are still here, and you can choose which apps appear on your home screen, and re-size and position them at will.

There are some changes. Edge replaces Internet Explorer as the web browser. Instead of HERE Maps, Windows 10 comes with Windows Maps, which keeps all the features we liked, including offline maps, turn-by-turn directions for walking and driving, and public transport information.

The Lumia 550 misses out on the iris scanning security of the 950, relying on a PIN or password for device security. Neither does it have the Continuum feature, which lets you connect the Lumia 950 to a display dock.

In our review of the 950, we commented on the scarcity of 3rd-party apps for Windows Phone. This has always been the case, but it's becoming more of an issue as time goes by and little progress seems to be made by Microsoft. If you buy the Lumia 550, you'll just have to accept that many of the apps your iPhone- and Android-using friends have on their phones, just aren't available on yours.

The Lumia 550 is powered by a Snapdragon 210 processor. This is a quadcore CPU running at 1.1GHz, with just 1GB of RAM, and feels underpowered. The "correct" processor for this phone would be the Snapdragon 400 used by the Lumia 640. The Snapdragon 210 feels sluggish, with apps taking a long time to load.

Onboard memory is quite limited too, with just 8GB available. You can add a microSD card for extra data storage, and we'd recommend that you invest in one. The maximum size card accepted is a massive 200GB, but a 16GB or 32GB card will probably do for most users.

The main camera at the rear has a 5 megapixel sensor, LED flash, autofocus and a digital zoom. It can record video at 720p HD resolution. It's a competent but unexceptional performer.

The front camera is OK, snapping selfies at 2 megapixel resolution, but it's hopeless for video, managing just a grainy VGA resolution.

4G connectivity is included with the Lumia 550, as well as support for 3G and 2G networks. It's Wi-Fi-enabled, and has Bluetooth and USB, plus a 3.5mm headphone jack.

Battery life is typical for a low-end smartphone, with around 7-10 hours of use possible from the 2,100 mAh battery.

The Microsoft Lumia 550 may come with the latest Windows Phone 10 operating system, but it doesn't have anything else to recommend it over the Lumia 640 running Windows Phone 8. To be honest, WP10 doesn't really bring anything new to the table either. The new features that WP10 offers, such as iris scanning, USB Type-C support and Continuum, aren't available on the Lumia 550.

Our recommendation? Spend a few quid extra and buy the excellent Lumia 640. The 640 has a faster processor, a much better camera and screen, a stronger battery, and NFC connectivity too.

I only want phone basically calls and texts is this any good for that?

Will my Lumia 550 work on WiFi to a blu ray player?

Reviewed by Jamie from United Kingdom on 16th Aug 2016
Awful phone. Click and wait for it to work. Each app you click on wait at least 10 seconds before it opens. In this day and age it shouldn't be on the market.
Rating:

Reviewed by Srikanth Jujoori from india on 29th Jan 2016
It's is the worst phone in Microsoft.
Rating:

Reply by James from UK on 1st Feb 2016
You should give a reason for your opinion.

Reviewed by waheed abdul from india on 18th Jan 2016
i recently brought this phone evry thing is ok but it doesnt hav dual sim n gud selfy camra.
Rating: