The SJ810V is a flagship 49" TV with premium styling and excellent picture quality from its 4K HDR screen. The display supports the HDR10, Dolby Vision and HLG standards for High Dynamic Range and uses nano-cell technology for a rich, full colour spectrum. The IPS screen is bright and has the advantage of wide viewing angles, although it can't match the deep blacks of Samsung's televisions such as the MU6400 or MU6470. The screen is at its best for daytime viewing or in a moderately-lit room. In a darkened room, the lack of contrast can become noticeable.

Gamers will appreciate the very low lag, and audiophiles will benefit from the Harman/Kardon speaker system, although this isn't the most powerful sound system available, with just 20W of total output.

The WebOS 3.5 Smart TV system gives you access to broadcast channels via Freeview or Freesat, and you can catch up with the BBC iPlayer, ITV Hub, All4 or Demand 5, and stream content from Netflix, Amazon or YouTube.

All things considered, this is an excellent mid-range family TV. At the time of review the price is a fair £800, but we strongly suspect that this will creep lower as the Christmas and Black Friday deals approach. 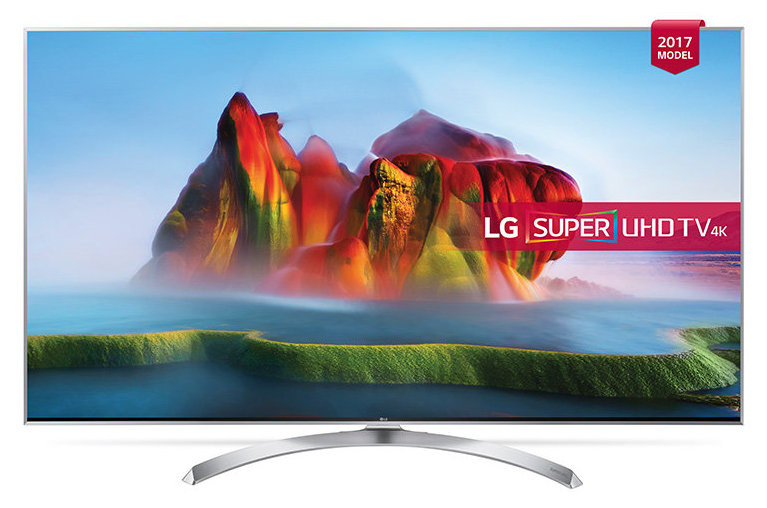 Does the LG 49SJ810V TV have screen mirroring?

Asked by Craig Richards from United Kingdom on 1st Dec 2017
Asking as seen in technical spec on Currys website that it has Amazon 4K but states on Netflix HD.

Asked by Paul from UK on 25th Nov 2017
These two TV's look the same apart from one has 800V and the other 810V in the title. LLG's web site comparison shows no technical difference apart from the stand so I'm trying to find out if there is one. The 810V seems to be a Currys PC world Tv so is it the same but with a different stand sold only through them?

Reply by peter from N,I on 27th Nov 2017
Is the difference in 32bit and 64bit. Not sure but thought I read this somewhere.

Reply by A Johnson from United Kingdom on 1st Dec 2017
The only difference is the stand. 800v has 2 small feet wide apart. 810v has a centre stand.

Reply by Steve B from UK on 13th Dec 2017
According to LG they are the same panel only stand differs. They are both 8 bit with FRC, currently the only true 10bit panels LG do are their OLED ones.

Reviewed by Bram from Belgium on 14th Feb 2018
This model displays colours very well and (static) HDR 10-bit is displayed with brilliant colours.
However, motion causes a lot of banding on light backgrounds, on any settings.

I've had this panel replaced by LG, which fixed a dark spot but the second panel still has as much banding as the first one.

Also the contrast is quite bad, this can be easily seen when turning off Local Dimming (which can be annoying in darker scenes).
Dark scenes are difficult to see due to this lack of contrast, even with brightness and contrast set to the max values.

There's also quite much backlight glow on this panel.
The panel is glossy, which reflects much light.
Rating:

Reviewed by Mike from UK on 22nd Nov 2017
I've had this model since end June and still learning things it does. In summary it has stunning picture quality particularly with 4k. It does an excellent upscaling job with SD as well! Out of the box you need to set brightness and contrast which are sooo high it gets complaints about light bleed and motion blur. Has 200Hz refesh rate. Web OS3 is great to use giving access to all internet stuff and host of options which appear as a ribbon along bottom of screen. Magic contoller needs some getting used to. Complaints about audio - for goodness sake, hook up optical out to decent sound system and it's sorted! Slim TV's are not shaped for great speakers systems. xxx800v is same as xxx810v panel - depends what region you live, checked with LG. IPS much much better than VA for viewing angles - you need to be almost edge on to get fall off in colour.
I could go on but suffice it to say we are all well impressed with its' performance - go out and get one!!
Rating:

Reviewed by James Bailey from Ireland on 20th Sep 2017
I bought this set 16th September 2017. It's replacing a non HDR 2014 Sony Bravia.I have to say, after a week, I'm puzzled. I know, somewhere inside this lovely LG set, is a wonderful picture just waiting to burst out.But so far, I just can't find it.The settings are quite complicated and HDR is a whole new world to me and I'm finding it difficult to release the beast that's surely chomping at the bit, waiting to be released.Sky UHD Soccer is ok on this set but honestly, I find there's a much more vibrant picture on the 3 yr old Sony.Motion blur on the LG has raised its head again.
Is there such a thing as proper calibration for this set....any tips anyone, I'd be eternally grateful.
I know there is a fine television set somewhere inside that beautiful frame, I just can't find it...
Rating:


Reviewed by William Rance from United Kingdom on 15th Sep 2017
I bought this set as a second tv to my new LG OLED55E7N, thinking it to be a middle of the road budget set. How wrong I was. It is an exceptionally good television with a terrific picture and sound. I was very surprised to learn that it has the latest HLG format which will allow the reception of terrestrial and satellite broadcasts when they start transmitting 4K UHD programmes in the near future.
Rating: