Huawei P10: show us the money

We've been big fans of Huawei over the past few years. The Chinese brand has challenged the key players with impressive and innovative phones for significantly less money. But 2017 looks like the year that Huawei has gone for the money grab, and the P10 costs just almost as much as a flagship phone from Sony, Samsung or LG. And yet you'll be pressed to find much of a difference between the P10 and last year's P9.

The P10 is an attractive phone - ultraslim at just 7mm, with a metallic glass body, and relatively light in weight for a phone this size. But it isn't an iPhone or a Galaxy S8. Instead it retains a slightly industrial look. The main difference in styling between the P10 and the P9 is that the P10 has a touch button below the screen as a home button. This doubles as a fingerprint sensor.

The rest of the front face is dominated by the almost edge-to-edge 5.1 inch display. An IPS screen with 1920 x 1080 pixels and a high pixel density of 432ppi, this screen is bright, sharp, and easy to read, even in sunlight.

Available in Black, Gold, and a a range of other colours, the phone is attractive and distinctive, but just not refined enough in its looks to command its premium price. 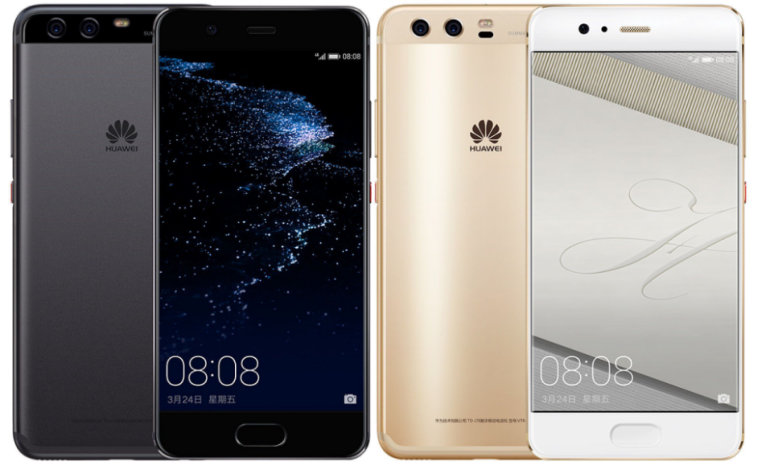 Inside the Huawei P10 you'll find something unusual - a Kirin processor. But unusual doesn't mean slow. The Kirin 960 is a 64-bit octacore processor, running 4 cores at a very speedy 2.4GHz and another 4 at a more modest 1.8GHz. That's fast, and the Kirin 960 is backed up by a hefty 4GB of RAM, making the P10 impressively quick. In benchmark tests, it's always going to finish in second place to the iPhone 7 or Galaxy S8, but in real world use, it's fast enough.

Another key feature of the phone is its 64GB of storage. This is expandable too, with a microSD card slot offering truly enormous storage capacity.

The P10 runs the latest Android 7 Nougat, paired with the latest version of Huawei's Emotion UI - EMUI 5.1. A number of modifications take this away from default Android, but once you get used to them, they feel intuitive enough.

Huawei first partnered with Leica for the P9 to introduce a two lens system for the rear camera. The P10 has upgraded one of the rear cameras to 20 megapixels, wile the other captures images at a resolution of 12 megapixels. The 20MP sensor is black and white, while the 12MP is RBG. The system then seamlessly merges the two images to form a final 20 megapixel colour image.

The camera does seem to perform as intended, and the large aperture helps to deliver low-light performance similar to that of the iPhone 7. The hybrid focus system results in fast and accurate focusing, even in low light, and optical image stabilisation keeps pictures sharp.

In addition, the collaboration between Huawei and Leica has resulted in plenty of artistic features to empower serious photographers to use this camera phone more like a dedicated camera. Plus, for everyday use, the Portrait mode enhances faces through automatic facial recognition that adjusts lighting for best results.

The rear camera is also capable of capturing 4K video.

The front camera is also a Leica, but is a more conventional 8 megapixel camera well-suited for taking selfies. Results are sharp and well-lit.

The P10 is a well-connected phone, with a USB Type-C connector, dual-band Wi-Fi, NFC, and a 3.5mm headphone jack. You can find your position not only with assisted GPS and GLONASS, but also Beidou and the new Galileo system.

For such a slim and lightweight phone, it's amazing that the battery is so large. The 3,200mAh battery is 10% larger than in the P9, and with a smaller screen and more frugal processor, battery life is impressively good. Additionally, the phone is very fast to recharge.

Conclusion - the best Huawei yet, but too expensive

Huawei has been a good brand to watch for top quality, competitively-priced phones. Until now. Sadly, the P10 costs a lot more than last year's P9, even though the differences are modest. We have to say that it's over-priced.

Still, if the price falls to, say, £500 sim-free, or £30/month on contract, then it will become well worth a look. The phone is nice to look at, very fast, with an outstanding camera and very strong battery life. It really has a lot going for it.

Is it worth removing the screen protector from Huawei p10 and adding a oleophobic coating as I understand the p10 does not have any ?

Asked by David from United Kingdom on 17th Jul 2017

Reviewed by Peejay from England on 10th Jul 2018
I upgraded at end of contract 8 months ago from a Samsung A5 to a Huawei P10 as impressed with features and battery life. Have had no problems with P10 phone until 10 days ago when a graphic 'Touch-disable' appeared on home-screen preventing use of the phone. Pressing the up-volume and power button simultaneously to clear the graphic had haphazard results. A visit to a local EE store eventually resulted in the removal of the screen protector which I had fitted. So far (24 hours), so good! Bad Update, as effects not thought through! Samsung A5 is now on a PAYG contract and will replace P10 at end of current contract.
Rating:

Reviewed by Colin from UK on 19th Apr 2018
Great, fast phone. But have to disagree with you saying has a great battery. I am lucky if use it an hour a day yet by 5pm, am down to 7% charge.
Rating:

Reviewed by Paul Bentley from UK on 9th Feb 2018
Just getting use to my P10 but impressed so far. Every review I have read so far has said it is too expensive compared with other flagship phones. Well it's now February 2018 and it is now available in the UK for £350 which is £200 less from the original price. Surely this must make it one of the best phones on the market as iphones and Samsung are still holding their prices? After breaking many screens, the most important thing for me was the gorilla 5 glass front and this is by far the cheapest phone with this glass. I think it's about time some of these reviews was reviewed.
Rating:

Reply by gb901 from United Kingdom on 12th Feb 2018
Couldn't agree more with the previous poster. Had the great p9 last year, but thus phone is even better with a longer lasting battery and fast charge.