The U11. Nice phone. But there's a disconnect between the phone that HTC believe it has created and the U11 in reality. Like the HTC U Ultra, the U11 uses HTC's new manufacturing technique to create a "3D liquid glass surface" on the rear of the phone.

"By layering highly-refractive precious minerals across the phone's back cover, we've created stunningly vivid new colors that transform light with every movement you make." - HTC

Forgive us, but we didn't notice any of that. The phone looks like its made out of shiny plastic. There's a noticeable seam where the glass rear coating meets the edge of the phone. We prefer the glass construction of mid-range phones like the Samsung Galaxy A5. The U11 is nothing special, although to its credit it does feature water resistance. It's a very heavy phone too, although slim.

The screen measures 5.5 inches, and that's a lot of screen - the same as the Google Pixel XL or iPhone 7 Plus. The Super LCD display is bright and super sharp, with a Quad HD resolution of 2560 x 1440 pixels giving it an incredible pixel density of 534ppi. But it's not a match for the AMOLED display of Samsung's Galaxy S8.

Beneath the screen is a touch home button that includes a built-in fingerprint sensor. The phone comes in a choice of colours - Black, Blue or Silver. 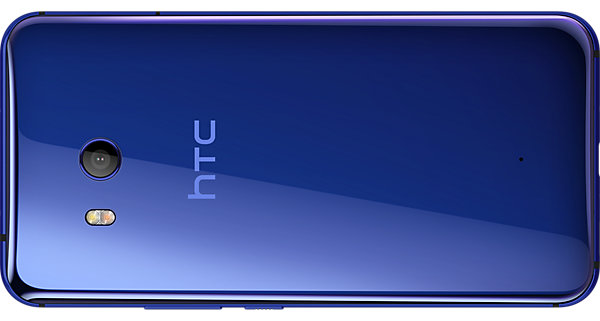 The U11 does have one unique feature. Squeeze. Or as HTC prefers to call it, "Edge Sense." Squeeze the phone's edge and it does things. Take a photo. Launch a favourite app. Squeal loudly in distress. It can do those things. Cool, we guess.

The phone runs Android Nougat 7.1 with HTC Sense, and the new HTC Sense Companion. Sense Companion makes suggestions based on things you do. Suggestions might include weather forecasts, route changes, battery optimisation and so on. You can tell it whether such suggestions are useful, so that it learns what you like.

The U11 also lets you launch the Alexa voice service by saying "Alexa." Alexa can help you with various tasks. The Google Assistant is on hand too, so there's no shortage of help with the U11.

There's no doubting the power of the U11. With an 8-core Snapdragon processor running at up to 2.45GHz, it's one of the fastest phones around. 4GB of RAM makes multi-tasking fast too.

Storage is a very generous 64GB, and this can be expanded with a microSD card.

HTC claims that the U11 is the best smartphone camera available, but it's been making similar claims for years now. The rear camera on the U11 has a 12 megapixel sensor, wide f/1.7 aperture to let in more light, HDR mode. The camera has a very fast PDAF laser autofocussing system. It can record 4K video and has optical image stablisation to remove camera shake.

There's no doubting that it's a good camera, but the best? It's possible. This is certainly the best camera we've seen on a HTC.

The front camera uses a 16 megapixel and is capable of recording 1080p HD video.

The U11 is a 4G phone with fast dual-band Wi-Fi, Bluetooth 4.2, NFC and a USB Type-C connection. Sensors include a compass plus GPS, GLONASS and Beidou positioning.

There's no 3.5mm audio jack. The USB socket acts as the headphone jack, although the phone comes with a USB to 3.5mm adapter. The headphones supplied with the phone are top quality however, so this probably isn't a problem.

The U11 comes with a 3000mAh battery. There's respectable for a phone of this type, but by no means generous. That Snapdragon processor is hungry for power. And the Quad HD LCD display is even more ravenous. Battery life is acceptable, but not a strength. You'll be charging every day if you choose this phone heavily.

It's good to be different, and we applaud HTC's willingness to experiment with its squeezy Edge Sense feature and its novel construction technique. But being different in itself isn't enough for us to recommend a phone. The camera is a key strength, but in other ways the phone lags behind others - the LCD screen and middling battery life for instance.

There's a simple rule that applies universally - if you're the underdog, you can't charge more for your product than the market leader, unless your product does something incredible.

And while the U11 is a very good phone, it's by no means exceptional. We can't say that we'd prefer to own this phone instead of a Galaxy S8, and the U11 costs more.

HTC U11 features include:

Reviewed by adrianeds from UK on 8th Sep 2017
I have always come to your website for reviews of phones, and agreed with most of what you'd say, and went with what you say. Now I don't own this phone, I have the Blackberry Keyone, and happy with. However, I feel there's bias creeping in to your reviews of late towards certain manufacturers, one being HTC. No matter how hard they try you seem negative, this phone has everything that the SGS8 has and a little more if we're honest. The camera on this beats every other smartphone today, if you don't believe me check out DxOMark top smartphone camera. HTC sense is 100 times better than touchwiz, no it's a 1000 times better, it does have the squeezing sides function and it works succesfully. I think your review is very unfair, my youngest son has just bought this phone for himself and it's a beast.
Rating:

Reply by Trevor from UK on 24th Sep 2017
i Agree with the bias. for years apple phones have been docked stars for its price compared to cheap plastic phones that were out there at the time , then samsung charge high prices and nothing? The G8 screen breaks just looking at it, not a word said. Theres alot of good phones out there not just samsung G8. No doubt everyone says the G8 sets the standard, i dont see it not how unresponsive mine is 4-5 touches to get things to work, just hanging there doing nothing when i want it to do something and the smashed screen from 2 1/2 feet fall on to carpet!!!