In a nutshell: The HTC One M9 smartphone looks almost identical to the iconic One M8. The UltraPixel camera of the M8 has been replaced by a much better 20 megapixel main camera, and the processor has been upgraded to an octa-core Snapdragon 810. The M9 isn't a great leap forward, but is one step closer to perfection.

HTC was the first major manufacturer to launch its flagship smartphone of 2015. It beat Samsung by hours, announcing the HTC One M9 on 1 March 2015 at MWC (Mobile World Congress) in Barcelona. The new HTC One M9 is the replacement for last year's One M8.

Iconic design is largely the same

Whereas arch-rival Samsung  is new to the all-metal phone party, HTC arrived a couple of years ago, with its iconic HTC One M7. This was updated with the One M8, and the One M9 looks almost indistinguishable from its predecessor.

HTC has kept the all-metal body almost unchanged. The familiar BoomSound speakers with their purposeful grilles are still here, giving the One M9 its distinctive looks. The M9 also now has virtual surround sound. HTC has trimmed a millimetre or so off the size of the phone, and it weighs 3g less, although it's a whisper thicker. It now has a dual-tone unibody design with mirrored edges.

The processor has been upgraded from a quad-core Snapdragon 801 to a 64-bit octa-core Snapdragon 810. This features 4 cores running at 2GHz plus a further 4 cores clocked at 1.5GHz. Needless to say, this is a stunningly fast combination.

The phone runs Android 5.0 Lollipop with HTC Sense. The HTC Themes app lets you customize the look of your phone using a photo - the app picks colours from the photo for use in wallpaper, icons, etc.

There's been a big change in the photography department. Gone is the much maligned (by us, at least) UltraPixel camera of the M7/M8. Instead, the rear camera now has a conventional 20 megapixel sensor. The new camera has a sapphire cover lens and a BSI sensor, and allows for good low-light performance, with no loss of detail when zooming.

The UltraPixel camera has now moved to the front, where it can be used to good effect, enhancing selfies in low-light. The front camera supports 1080p HD video recording.

The camera software has been updated too, with HTC Eye Experience and an improved Zoe app providing a rich, creative environment for camera enthusiasts. 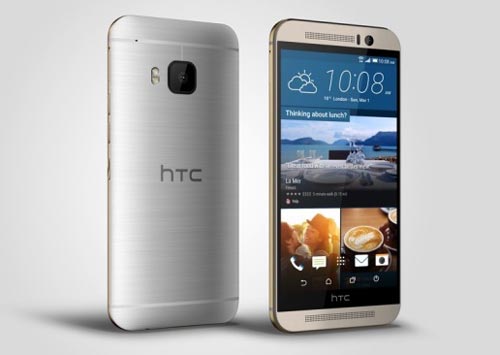 The One M9 is a 4G phone, and the number of LTE bands it supports has been increased from 4 to 7, allowing greater roaming flexibility.

The battery capacity has been increased by around 10% to 2840mAh. This is a very welcome improvement.

The One M9 will be in the shops on 31st March 2015. We're disappointed by the price - you'll have to sign up for a £40+ per month contract to get it free - although we expect that price to fall after the first few months.

The One M9 doesn't bring a lot of change when compared with the M8. The main differences are the replacement camera and the upgraded processor. The design is largely unchanged. You could say, why change a great design? Or you could lament the fact that there's nothing new to distinguish the new phone in its appearance.

The camera badly needed replacing, and we wholeheartedly support HTC in making the change to a conventional camera. The UltraPixel front camera handles low light well.

The processor and memory upgrades are obvious incremental improvements.

The battery was a problem with the One M8, and the modest increase in size must be a good thing, although the M9 still falls behind some existing phones like Sony's Xperia Z3.

The One M9 looks to be a solidly dependable phone that has evolved rather than re-invented itself, in HTC's relentless quest for perfection. We awarded the M8 5 stars, and although the M9 costs more, it's closer to the perfect phone, and we're happy to give it 5 stars too.

It's also worth checking out the best HTC One M8s deals, as these are more competitive than for the flagship M9.

HTC One M9 features include:

Is the m9 compatible with the DMP-BD84 AND can it hook up wirelessly?

Reviewed by Derek from Uk on 13th Feb 2016
Lovely phone, had an iPhone 6 plus for a few months but didn't like it, this is a much better phone both to look at and to use. definitely going to keep it.
Rating:

Reviewed by Paul from Wales on 2nd Jun 2015
This is now my 3rd HTC and each time they have improved immeasurably. I have just upgraded from the M7 which I loved so much so I didn't see the need to go to the M8 but the lure to go for the M9 was too much and boy was I right. It a fantastic bit of kit much faster than my old phone if you have not contemplated changing to the M9 do you won't be disappointed.
Rating:

Reviewed by Mr Ed from New Zealand on 16th Apr 2015
My HTC one M9 is a beautiful piece of engineering, enclosing some wonderful technology. For me it has the wow factor & ticks all the boxes!!....
Rating:

Reviewed by Kevin from UK on 24th Mar 2015
This is suppose to be a review of the M9 and not M7 and as such the review below should be not allowed. The mobile is not even out for another week. If it is half as good as the M8 it will be superb. [Editor's reply: We have opened this page up for reviews as there are handsets available to try out in all the shops already. All reviews are of course just opinions.]
Rating:

Comment by Mark from England on 3rd Mar 2015
Sorry HTC - I've been a fan since the original Desire, which is still a classic device IMO. I have the M7, and is almost perfect apart from the awful camera. M8 didn't offer anything extra, so I stayed with the M7. The M9 is same-old same-old I'm afraid. Maybe you should have looked at some of the renders that were produced before you launched, some looked beautiful.