In a nutshell: The HTC One A9s is a top mid-range phone, with an attractive slimline all-metal build. The 5-inch HD screen looks good, and the phone takes good pictures with its HDR cameras. Performance from the 8-core processor is strong, and battery life is reasonable too. Priced for value, this is an excellent buy.

If there's one phone that has captured the public's imagination in the past decade, it's Apple's iPhone, so who can blame HTC for seeking to replicate its iconic looks? The HTC One A9s looks uncannily like the iPhone 6s, and that's going to be a strong draw for a lot of people, who'd love to own a phone that looks great but costs a fraction of what Apple customers are used to spending.

The One A9s is slightly larger than an iPhone, with a 5 inch screen. Many users will find this to be the perfect size. The phone has a dual finish metal body and is built to a high standard with diamond-cut buttons and polished edges. A fingerprint sensor is built into the home button, and it's a sleek, slimline phone that's relatively light in weight and comfortable to hold.

It's available in a choice of Dark Grey, Blue or Silver and looks good in all colours.

As mentioned the screen measures 5 inches, which is probably the most popular size in smartphones right now. The Super LCD screen has HD resolution with 720 x 1280 pixels, giving it a pixel density of 294ppi. It doesn't have quite the eye-popping clarity of the One A9, but it's still a sharp screen with good contrast and brightness. 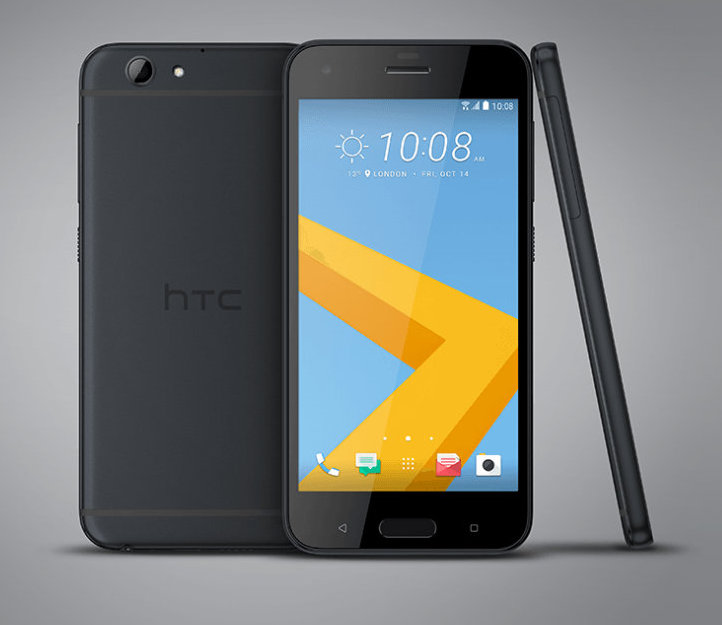 So although it looks like an iPhone on the outside, it's definitely an Android phone inside. The A9s runs Android 6 with HTC Sense user-interface customisations and apps. HTC Sense used to be a behemoth, but rather like Samsung's TouchWiz modifications it's much lighter these days and less controlling.

HTC Sense includes the HTC Freestyle Layout, which lets you customise the look of your screens, placing icons, stickers and widgets off-grid for a uniquely personalized layout. It also includes the much-maligned Boost+ app that adds little or no value, and is best ignored. On the whole, HTC Sense probably adds more than it subtracts from a pure Android experience.

The A9s uses a different processor to the previous A9. The A9s runs with a 64-bit 8-core MediaTek Helio P10 processor, with a faster clock speed of 2GHz and a faster GPU. It's a strong performance from a mid-range model, and in fact the P10 is capable of driving more demanding platforms than the A9s, so there is capacity to spare. Unlike big/little processors, the P10 is a straight 8 system, with all 8 of its A53 cores capable of running at a full 2GHz. With 2GB of RAM available, this is a good phone for running many apps simultaneously.

The built-in memory of 16GB is exactly what we'd expect from a mid-range phone, and you can add up to 2TB of extra storage using the microSD card slot.

The A9s uses a 13 megapixel BSI camera very similar to what we've seen on phones like the One M8s and A9. With a large sensor, BSI, HDR and an f/2.2 aperture, it's able to capture better low-light images than a lot of mid-range rivals, although shots can still be grainy at night.

The front camera is fixed focus and 5 megapixels, but is ideal for selfie shots, especially with its handsfree Voice Selfie and Auto Selfie options.

Both cameras are capable of recording Full HD 1080p video.

The One A9s is a 4G LTE phone with fast dual-band Wi-Fi, Bluetooth, USB, NFC and a headphone jack. GPS and GLONASS positioning are included.

When HTC launched the One A9 last year, we slammed it for having poor battery life. The company has made an effort to remedy this, installing a larger 2300mAh non-removable battery and cutting back on the number of screen pixels. Both moves enhance battery life, but the A9s still isn't a strong performer in this regard. We'd say that it's now about average.

We didn't rate last year's One A9 very highly because of its poor battery life and the fact that it was priced as a top-end phone despite mid-range performance. With the A9s, both of our complaints have evaporated. An enhanced battery life and a slashing of the asking price make the A9s a very attractive option.

First up, it's a beautiful phone, with iPhone looks, a premium metal unibody, slim lightweight build and a nice screen. The phone is fast for a mid-range model, with plenty of memory and good connectivity. And it scores well for photography too. In short, it's a very strong all-rounder that has no real shortcomings.

We'd say this is one of the best mid-range phones you can buy in 2016. You might also consider the excellent Samsung Galaxy A5 (2016) or Huawei P9 Lite.

HTC One A9s features include: