The iPhone 8 is an evolution of the iPhone7. Revolution is left to the iPhone X, coming in November.

The iPhone 8 looks much like the previous generation iPhones, except that it has a new all-glass design. It's available in Gold, Silver and Space Grey finishes. It's compact, like before, and water-resistant. Slightly thicker than the iPhone 7, it's still a slim phone, but the weight of the iPhone creeps up with each new version, and this one is the heaviest yet.

As before, the Touch ID fingerprint sensor is built into the familiar home button.

The screen size and resolution hasn't changed since the iPhone 6, and 326ppi is the kind of resolution we'd expect from a mid-range Android phone these days. You'll have to wait until the iPhone X is released if you want a better screen.

The iPhone 8 is super-fast, with an A11 Bionic chip. Cool name. Cool processor. It's quite probably the fastest phone you can buy.

The memory has been given a very welcome boost too, with the base model coming with 64GB of memory. Now we're talking. This is perhaps the first time in years that the base iPhone model has come with suffiicent memory to satisfy most users. Unless you're a power user with masses of stuff, you won't need to fork out more for the 256GB version.

A new iPhone demands a new version of iOS. iOS 11 ushers in an era of augmented reality in games and apps. The lock screen has been updated, with more information available. There are new camera filters too, and Live Photos let you turn photos into video snippets. The App Store has also been given a makeover, and Siri speaks more languages and is keener than ever to be of assistance. 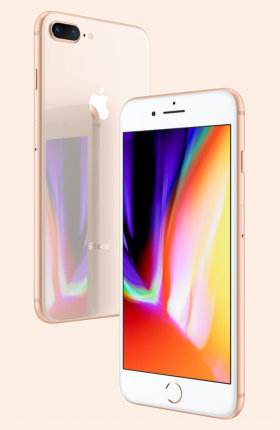 Little has changed when it comes to the front and rear camera.

The front camera has 7 megapixels and features digital image stabilisation and video recording up to 1080p HD. FaceTime video is available over Wi-Fi.

Not much has changed on this front. The iPhone 8 supports a wide range of LTE bands, plus fast Wi-Fi and Bluetooth. NFC is present, and GPS and GLONASS positioning are available. EarPods are included in the sales package and plug into the Lightning Connector.

The battery life of the iPhone 8 is about the same as before - around 13 hours of continuous use. New is wireless charging, and because this is an Apple product, it has its own name. AirPower. Like other phones with wireless charging, it works with Qi chargers, available separately.

The iPhone 8 brings in a few minor upgrades - more memory, wireless charging, and a faster chip. That's not a big change, and not really sufficient to justify its price hike compared with the iPhone 7. But as Apple has proved time and time again, when you have a winning formula, no great changes are necessary.